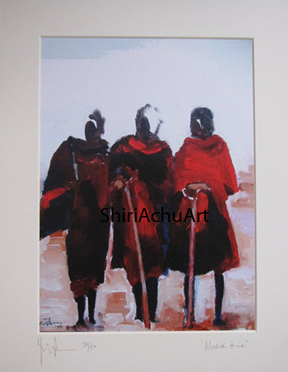 It’s October! 10th month of the year, which is also Shiri Achu Art’s 10th Anniversary since Shiri’s very first exhibition, titled ‘The 30th Act.’ I would like to dedicate ‘Maasai tone’ to Dr Cole, Faith Evans, Papa Salle John and Ms Samia Nkrumah and the many fabulous people who have purchased this print over the years.

Not only because this year marks Shiri Achu Art’s 10th Anniversary, but also because exactly ten years ago, I created this painting, I would like to run a competition for all readers of olustories.com to win a signed limited print of ‘Maasai tone’.

After carefully studying the “Maasai tone’ painting, kindly write a few sentences about what it conveys to you about the Maasai. You have the rest of this year to send your answers to: olu@olustories.com

4 winners will be chosen and announced on the last day of this momentous 2019 year – and your short 400-word essay about the painting will be published on Olustories.com.

Good luck to you all.