Home > Olu's Stories > When an enraged lawyer assaulted me 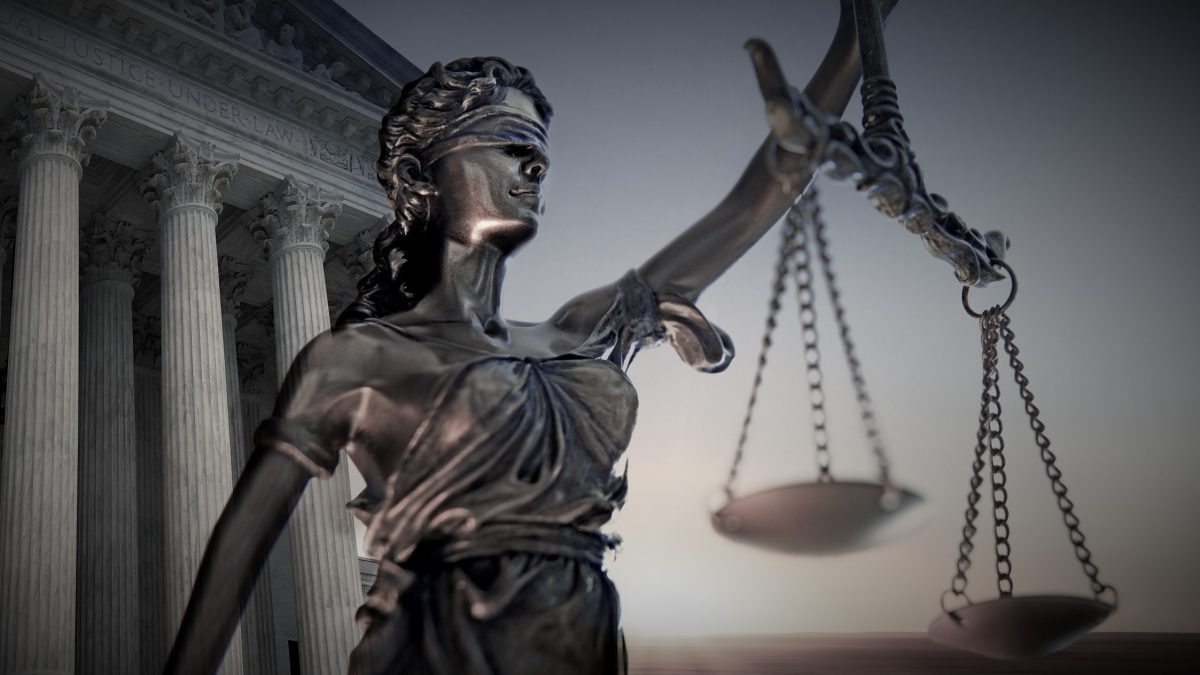 A statue of the blindfolded lady justice in front of the United States Supreme Court building as the sun rises in the distance symbolizing the dawning of a new era.
Olu's Stories

I jumped as my ex’s attorney slammed her hands on the table and yelled, as she goes out in left field.

“Look at me when I am talking to you, dumbass! How did you get into Columbia? You must be a fucking retard, you can’t even look into my eyes. I think you have some kind of sickness. You do, don’t you? That’s why you can’t look into my eyes, you dumbass!” She slams the desk again. But this time I look into her eyes, deviating from my traditional Yoruba custom of not looking into the eyes of adults when speaking to them—as a sign of respect. My abuser deserved no respect from me.

“Yes, I fucking can. Try me. If you don’t sign that fucking divorce, I’m gonna get you a guardian and he’s gonna sign the divorce anyhow.”

“Get out of my office, or I am gonna have the cops throw you in jail for trespassing! Then you’re gonna need a fucking criminal lawyer too!”

Every movement she made was thunderous, abusive, and lawless. I walked out of the Broadway office her law partner had invited me into in order to work out an amicable settlement of my protracted divorce under threat of abuse of the law…more to escape someone I perceived as non compos mentis. It is ironic she claimed she had the power to use the law to declare me incompetent (although I was and am of sound mind) and she said she would use it to get my ex a divorce to walk free without a settlement of what I was entitled to by law.

I had supported her through law school. She had been a heavily indebted, impecunious elementary school teacher while I had graduated debt free with an MBA and was a banker on the eve of her starting law school. She persuaded me to quit my job, jettison my finance licenses and go to medical school instead of accepting the guaranteed scholarships I’d earned for law school.

“You’d be considered too old, and they will be mean to you because you’re a Black guy even if you got hired. I see how they treat the Black male attorneys like they’re dumb,” she claimed.

“But if you’re a doctor, you can be independent and still have that business empire you want us to have. We can own our own hospital! And I will be so excited if you’re the doctor that delivers our babies!” She had clapped her hands to a thrilled clasp then. It seemed like legitimate advice from someone who had always accepted career guidance from me.

One would have thought that I’d have learned my lesson never to honor another invitation from the lawyer’s office to try and reach a settlement again. This is advice to lay folks: never go to your counterparty attorney’s office without a lawyer.  I am an agreeable, courteous, and cooperative person often described as thinking the best of people. My tutor at Oxford University had called me optimistic in class. Thus, I acceded to another request from the abusive lawyer’s more amenable law partner, to come to a divorce agreement at their office.

Everything had taken me by surprise. I did not know how we went from both being approved to buy a house in Manhattan which we planned to move into, to suddenly her serving me divorce papers in the same week. But that’s another story. After almost a year since the acrimonious divorce proceedings started, it was demonstrated that what was appearing to be a profession of pettifoggery was far from the most honorable and esteemed profession I had envisioned. My ex was a practicing attorney at the time, too. I had persuaded her to leave teaching and to apply to law school, because I had big plans and wanted an attorney wife as my business partner. The night before she told me over the phone—shockingly—that she wanted a divorce, she had called me too ambitious for her.

“I want to go and enjoy my life, ” she insisted.

When I wrote her law school application essay and selected the field of law (derivatives) I needed my wife and partner to be in for my well-crafted and painstaking plans, and then used my hard earned savings to support her financially and emotionally through Harvard Law School until she graduated, I had been unaware of her reservations about my ambition. How I wish she had told me upfront then that I was too ambitious for her. I may have been wary of sacrificing for the wrong person.

The ambition and sacrifices appeared to have mixed well with a good and eager student; it seemed to be gradually paying off – for her at least, as she now earned almost a quarter of a million dollars in income a year before she was 30. It was a dramatic change from the 30,000 dollars a year she had been earning when I met her. But I had not realized how such a dramatic change in income was enough to make her change too.

Had she confided in me that she did not want an ambitious man, I would have refrained from taking the foolhardy action of investing in her—sacrificing my money, time, knowledge and devotion.

I was the antipode to the position that Black men did not support their wives. And my steady, deliberate and informed support had yielded fruit.

“I have never had this kind of money before, and I must go and enjoy my life before I die.” She literally expressed a hedonistic Yoruba philosophy: J’aiye ori e. And she was gone. Disloyalty will destroy ambitious plans and any union.

The attorney who had started representing me had said that he was ill-prepared and would lose the case because he needed more time to go to trial, and so he asked me to request that the judge provide an extension for a hearing—which is routinely granted. He thought the judge was deviating from the law in our case, thus, he filed an appeal, which I had not authorized in the first place. But he argued as my lawyer he could file an appeal without my signature or authorization since he claimed my ex was manipulating me. Although I had unequivocally told him not to file an appeal.

He wanted us to go to trial, but he had mysteriously billed me 50,000 dollars already apart from the 10,000 dollars my ex had been ordered to pay him. I wanted another attorney. I spoke with another lawyer that was highly recommended. But he asked me to pay 10,000 dollars in advance.

However, as I stood alone in the corridor of the hallowed temple of American justice pondering how to unravel my hitherto charmed existence from the maelstrom, the judge approached me and said something that stunned me. She informed me that she would give instructions to an arbiter she was transferring our case to, not to give me an extension to properly prepare for the case. But she had accepted postponements from my ex when she decided to suddenly take vacations that conflicted with pre-scheduled court dates.

This bothered me, but she was a white female judge, and I was a Black male immigrant whose wife had brought a younger man to court and held him romantically, when I had not even yet put the ink to paper to finalize a divorce. It would not have looked good to the judge, had the tables been turned. But as a Black man, a member of the vulnerable group whose rights are routinely impugned in America, I came to realize I did not have the rights others take for granted.

It was why the rogue cop, Derek Chauvin, casually snuffed the life out of George Floyd by pressing his knee to the prostrate and manacled man’s neck for an ungodly 8 minutes and 46 seconds in broad daylight. I realized then, I was expected to simply feel grateful that I was alive, grateful that I was not in jail; grateful that I could breathe. I had today.

And I was screwed. So, I agreed again to meet a second time at the untethered lawyer’s office. I was meeting with the pleasant partner in a conference room. But then she walked in again. I felt the hair on my skin rise. Soon after, she starts cussing and throwing her histrionics in the pestilential cloistered room. The pleasant partner left. I’d had enough and was given documents to sign to end the over 5-year marriage that had never been violent and never involved cheating on my part. I started reading it, and she got up affectedly making an exasperated grimace. As she left the room, she mentioned something about not believing I got into law school, since I read slowly.

My phone rang. It was my pastor.

“Pastor please hold on. I am about to sign the divorce papers, and I am reading them now.”

The door swings wildly open and she storms in again, her bloodshot eyes flaming—just before I hit a button on my phone, as I looked up into pure hatred. She’d told me she was from the bible belt—the South.

“Why is it taking you so long, you dumbass? How did you get into law school you dumbass?”

“I am reading the terms and the agreement before I sign it. It’s my life and I must understand what I am doing. I must read it first,” I protested.

“If you don’t sign that paper, you won’t have a life. Got it? I’ll have you eating from a garbage can for the rest of your life! Because I’ll slam a restraining order on you that nobody will ever want to hire you again! You will never be able to get into any profession. You don’t believe me? Try me!”

“But I haven’t done anything wrong. I never hit her in my life and I have never threatened her with harm. In fact, she’s the one who’s cheated. How can you get a restraining order because I want to read what I am signing?”

“Because you’re a fucking dumbass that’s why!”

Suddenly she slams her hand on the desk. Simultaneously, she forcefully tears the documents I was holding from my hands, as she slams it back on the desk. She raises them over her head, and I dock to the side as I feared she was about to hit me with the documents in her untethered aggression…Missed.

“Get the hell out, I am gonna call the cops on you now and you will be needing a criminal attorney to get you out of jail and not a divorce lawyer!”

I get up and flee from the path of the professional kvetcher I thought was unhinged. I had learned my lesson. I looked at my phone to see if it had recorded it all. Life is like a psychotic on stilts. You’re bound to fall sometime.