Home > Olu's Stories > The gang whose ass got kicked 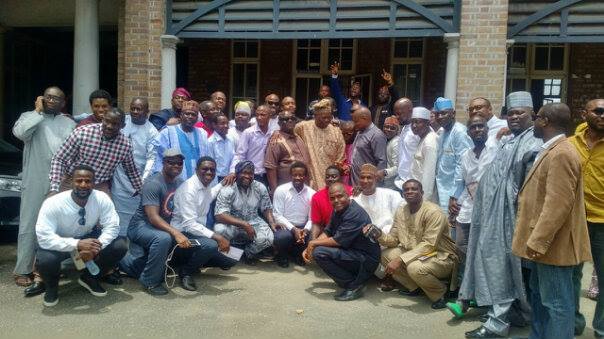 It was a trap. I had not been certain of it when I’d cautioned Femi, Lanre and Yomi (collectively called FLY, an acronym from the first letter of each person’s Yoruba name) as they enthusiastically moseyed on to the snare a rival “posse” had elaborately set for them. A little boy informed us that the person we’d come to see was waiting for us. Yomi was the first to walk into it. Then he did something silly: after going through the side door that led to the ground landing of the staircase of one of the highbrow buildings in 1004 Estate, Yomi comically turned around and walked out again. Then Donald ordered him to walk back in as we followed.

And there they were: Donald, Idemu, G-man and four others whose names I never got to know, because they were not relevant—being meatheads and the muscle arm of the teenage gang of 1004 Estate (1004). 1004 is the largest single luxury high rise estate in sub-Saharan Africa comprising over 1004 flats in clusters of apartment buildings in a gated community in Victoria Island, Lagos—once the most exclusive area in Nigeria. It was inhabited at the time by government officials and civil servants and was a bastion of the burgeoning Nigerian bourgeoisie.

Thus, Donald and his posse, being kids of civil servants were thug wannabes at 14 years old, who’d watched too many American gangster movies and had vacationed too frequently, residing in the ‘ghettos’ of the West. Although he was the smallest of the posse, the most voluble was also the most yobo, the biggest bully; but Donald was also the weakest of the crew. When he sliced his arm and spread some powder over it, we realized this little thug wasn’t fucking around. I wasn’t going to fuck with someone with bloodshot eyes that I believed to be a drug-user at the time.

Consequently, when he jumped up and smashed my head with both hands, I was cool—my head was too big to miss. It hurt, but there was no yawp to sound my agony. My comrades in durance toed a similar line. Yomi smiled like a saint after Donald slapped him in the face several times. How did we get in this mess?

Of course, it all began with a girl. Toun was partially half-caste—a slur in the West perhaps, but a cladistic that is endearing in Nigeria, describing folks that are of mixed racial heritage like Meghan Markle. When we were 13, we thought Toun was just as pretty, too (although we did not know Meghan Markle—Lisa Bonet was our American reference. And Toun looked just like her).

Till today, it remains unclear who was interested in the Lagosian teenage Aphrodite who obviously had us all smitten, but who some of us felt was way out of our league. Certainly not me, since she was a year older and I did not have enough hair on my chest—or any hair in my pubes for that matter—to be so bold. Femi and Lanre did. Nevertheless, I was the man with the whip. Yes, being absolutely “aje butter”—Nigerian slang for a sheltered kid—my dad had a “driver” chauffeuring me around town at 13. Thus, in unison four teenagers decided to pay Toun a visit.  The driver, brother Musbau, had dropped us at 1004 and cruised off to shine for some damsel in Lagos, who could only be approached in a car, although she trekked on legidiz benz—as we called pedestrians in Lagos.

There was radiantly beautiful Toun. She was a perfect hostess to four boys who did not have much to say to her. We just sat in her living room and she smiled at us. It was awkward and so we decided to exit her presence for a pow-wow, realizing we did not exactly have a plan or reason for our visit—other than I suppose wanting to see her splendid face and gawk at her derriere each time she retreated to the kitchen, acquiescing to our request for water to quench our thirst. Legitimate enough.

Unfortunately for our callow selves, Donald and his posse did not see it that way. The rascals really thought like gangsters and had a network of spies who informed them that there were trespassers from out of the estate who were not only encroaching on their territory, but who also harbored amorous intentions on the Capo’s girl. Yep, Toun was alleged to be the Capo’s girl, and the Capo was—you guessed it: Donald. Alleged? Toun did not see it that way, since she did not even know it. I later learned they did not even talk. Nevertheless, we got the beating of our lives for it.

Lanre had been considered the toughest among us and was known to the young hooligans since he’d once lived in 1004. A couple of meatheads had wrestled with him at the same time. Compared to the rest of us, he was looking pretty good and most like the hero as he fended them off. The harshest hit was saved for Femi—the leader and “F” in the acronym, FLY. Donald had concluded that Femi was the one most likely to tug on the heartstrings of his “fantasy.” In my dread, I missed the proximate cause of the spat that ended with Donald throwing the most stinging slap to Femi’s handsome mug—which caused hives and lesion-like eruptions to break out on his skin. This was in addition to the pink eye and the deluge of tears that streamed down enraged Femi’s now misshapen face. Then Femi who was well built from swimming every day, went wild and had to be restrained and then begged by the other rascals from tearing Donald to bits.

That’s when we fleetingly realized that the rascals were just kids like us. But they’d put up a frightening show with Donald juggling bottles in his hands, as we all held our breath in the still air of the stairwell at 1004, praying the bottles would remain safely suspended in the air to alternately land in the little tyrant’s hands. He’d warned us that if he dropped the bottles he was juggling, then one of us would get a slap. Somebody sneezed! Donald dropped a bottle!!

“Who broke my bottle?” exclaimed Donald in anger. Yomi’s hand went up like a schoolboy’s. But his matching sheepish smile only annoyed Donald, who stung him on the face with another lithe slap. But their brief reign of terror in the stairwell petered to a pathetic end as Femi screamed and kicked in anger and I noticed the fear in their faces. The oldest, and most muscular, Idemu now changed his tack as he tried to coax Femi into calm.

We survived the ordeal and word soon spread around my all-boys secondary school, King’s College, where corporate pride was whipped up and all the toughest guys promised to avenge and repair our school pride. A hit on one of us, was considered a hit on all of us. My car would transport us to glory after our 1004 ignominy. But our plans to restore our honor fizzled out when it was agreed that we should hold consultations about 50 miles away, liaising on the premises of our sister arm—Queen’s College. King’s College and Queen’s College having been established by our former British colonial masters, as “a school” to build future Nigerian leaders, were kept segregated, as the puritanical colonizers did not think it wise to keep teenage boys and girls within close proximity.

Our new posse, conveyed in my dad’s car, grew and FLY evolved into a larger group called the Frys because it was on Fridays that my dad’s driver drove us to the other side of Lagos, to convene at our sister school. Somehow ten young bucks managed to squeeze into a four door, four passenger seater sedan, packed like sardines and travelled across Third Mainland bridge without incident. Thus, our desire to avenge our school pride had through many other convoluted twists, led about ten pubescent boys to congregating every Friday after school hours, surrounded by a bevy of 2,000 teen beauties. Until the driver, Musbau, spent too much time away scavenging Lagos for girls he could trick into believing he owned an air-conditioned car.

As we pulled up at Femi’s gate and spied his mom with anxiety written all over her face, while she stood outside with a cop, Musbau sped off in panic. But Femi’s house was located at the close of the street, and he had to turn around at a blind alley. The driver was forced to stop by Femi’s mom and the cop now standing in the middle of the street impeding Musbau’s escape. I do not know if Musbau had intended to run them over or it was Femi’s words that stopped him.

“The policeman is my piano teacher,” Femi said to the relief of the frightened driver.

Musbau had left us at Queen’s College for about six hours as he lollygagged around Lagos, showing off my dad’s car, doing whatever it was he did when he dropped us off. Even Lagos traffic was not a good enough explanation for why we did not return home from school on time. And that is how the Frys was disbanded. FLY remained though. As for Donald: a few years ago, as some of us reminisced about our teens, I learned he had become a practicing surgeon in London. Donald, the drug-using teenage thug had become a real medical doctor who prescribed drugs—legally.

Donald’s turnaround story makes you wonder what could become of America’s inner-city kids, if their lives are not prematurely snuffed out. Because you start off poorly, you do not have to be doomed to a poor ending.