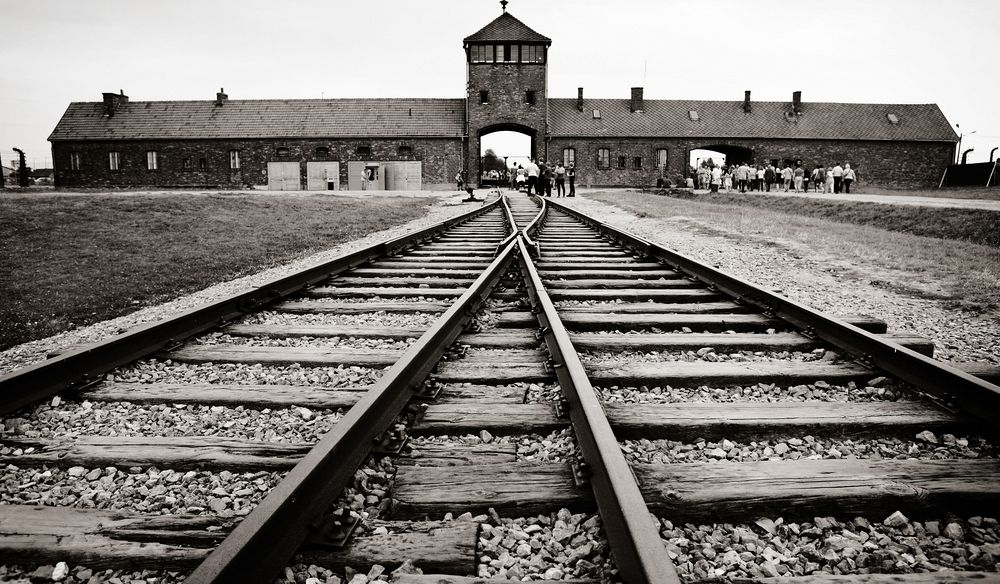 Before the Holocaust orchestrated by Adolf Hitler, the German Nazi leader, another genocide had occurred about two millennia ago, orchestrated by another political adventurer and opportunist. Like the Nazi leader, Hitler, Julius Caesar, who later became the sole Roman ruler and dictator until his assassination, understood the importance of cultivating a cult of personality.

Julius Caesar would precede Hitler in perpetrating genocide against a people, in his conquest of the Gallic tribes—which culminated in the decisive Battle of Alesia in 52 BC. It is said that Julius Caesar gratuitously had millions of Gallic people tortured and slaughtered. We know of the genocide of the Gallic people, because like the Nazis recorded their decimation of the Jews, Julius Caesar also wrote of his massacre in Gaul in his book Commentarii de Bello Gallico. The ancient historian, Plutarch, suggests that Caesar killed a million people in Gaul, and enslaved a million more.

However, unlike the Jewish victims of the Holocaust, the Gallic victims of Caesar’s genocide in Gaul did not leave us with personal written accounts of the Roman dictator’s crimes against humanity. We cannot identify with the victims, the way we can identify with Anne Frank and humanize her because of the diaries she meticulously kept and left posterity. No doubt it is crucial for the victims of the Holocaust and its survivors to have a voice that not only humanizes them but also cautions humanity against its worst visceral instincts in order to forestall genocide in the future.

In a short time, all the last survivors will have passed away. Who will be the authentic voice of the Holocaust after they are gone? Credible record keeping has underscored Jewish identity and served to legitimize their story framing their intergenerational zeitgeist as a chosen people marked by persecution, as noted in Yossel Rakover Speaks to God: Holocaust Challenges to Religious Faith, “No people more chosen than a people permanently persecuted.”

Through a people’s meticulous recordkeeping we know that the Gallic tribes were not the only ones who suffered genocide under Roman imperialism. Jews did too, often being scapegoated and targeted by syphilitic emperors like Nero, mainly because of their monotheism and aversion to the practices of the polytheistic Romans, whose emperor was officially the head of religion and intermediary between the gods and Romans and was to be worshiped at least ceremonially.

The Roman citizen and Jewish historian, Josephus would record further Roman persecution of Jews in his work, The Jewish War. More of Jewish persecution under the imperialistic rule of the Romans which led to the expulsion of Jews from their homelands in AD 70, comes down to us from the passionate scrivenery of an inspired Jewish missionary, who had once been a pharisee: Saul of Tarsus’ epistles serve as the foundation of Christian doctrine. Saul, also a Roman citizen, is known in history as the Apostle Paul.

Thus, history reveals that Jews who were firsthand witnesses of the persecutions perpetrated against their people, have tended to narrate their own story. But who will tell the story of the Holocaust in such a way as to retain authenticity, authority, and veracity? And to what end is the recounting of atrocities perpetrated against Jews (pogroms and genocide)? Are the narratives uniquely a part of Jewish identity to remain wholly in their collective memory, untampered with and uninvaded by the participation of non-Jewish people? Or are the narratives universal lessons that bind humanity and have become world heritage—just like much of Jewish religion and its derivatives have become?

I will elaborate on each of these themes by reflecting on historical Holocaust literature.

What happens when the Holocaust is used by fraudsters for cathartic misrepresentation as appears to have been the case in Fragments written by Binjamin Wilkomirski? In 1998, a Swiss journalist named Daniel Ganzfried, debunked Fragments and postulated that Wilkomirski’s claims of being a child Holocaust survivor were fabrications. While Wilkomirski would become something of a cause celebre, his claims of being a Holocaust survivor were widely accepted as being fraudulent. Furthermore, psychologists have weighed in and argued that while Wilkomirski may not have intended to be fraudulent and possibly has these false beliefs about his childhood, his memory as recorded in his work, Fragments, manifests some past trauma he probably lived through and serves as a cathartic mechanism for him to come to terms with his tragic past.

In any event, his work that had initially been welcomed as a masterpiece, immediately diminished in value once the fraud was evident. As the Swiss anti-Semitism expert Stefan Maechler remarked, “Once the professed interrelationship between the first-person narrator, the death-camp story he narrates, and historical reality are proved palpably false, what was a masterpiece becomes kitsch.”

However, Wilkomirski while not being historically factual, demonstrated literary merit in his ability to evoke vivid imagery and emotions of the trauma that a child in the concentration camps would have experienced. I recall that one of the greatest works in fiction, David Copperfield, is said to really be an autobiography of Charles Dickens, dressed as fiction—a lightly fictionalized rendering of Dickens true life. Although Wilkomirski tried to masquerade fiction as authentic, would his work have been received differently and been valorized had he categorized his vivid invention as what it turned out to be—a work of fiction?

The second concern is writing fiction to recreate or narrate the Holocaust. We can examine The Shawl, a fictional account of the Holocaust published in The New Yorker magazine on May 19, 1980. The author, Cynthia Ozick in a masterful use of imagery, uses inanimate objects to paint vivid pictures of events—that could have been part of the landscape in the Holocaust—and conjures up emotions in a way that gives them life, while her actors are relegated to nondescript ghostly figurines. The inanimate objects she breathes life into tell the story of how human life is devalued as objects are animated with the characteristics of living beings: thus the shawl provides nourishment and sustenance as opposed to the nipple of a mother that has no milk. The shawl protects and comforts a child that needs protection from a sibling that objectifies her for cannibalism. The yellow star reminds us of the symbol of persecution, and the blueness of eyes and the yellowness of hair portray the significance of the Aryan look during the Holocaust.

Fiction provides new opportunities to explore themes in Holocaust literature and to broaden the milieu of narrators and narratives of a very important genre.

Additionally, I reflect on the question of who determines the authenticity and authority for the narrative of the Holocaust? Who defines these notions that legitimize the voice of the Holocaust? Again consider that we have reached an era in which almost all the Holocaust survivors have passed away. Should the authentic telling of the accounts which remind us of how human vulnerability can serve to unite us all be restricted and lost with the survivors—and be buried with them? Or merely with Jews?

We are now living in an age, not even a century since the Second World War, in which many American youth have no idea what the Holocaust was. If the tragedy and lessons of the Holocaust represent a human story, and a lesson for mankind, then like the once exclusive religions of the Jews that have found hierophants among gentiles, perhaps the Holocaust narrative should find agency with non-Jewish interpreters of the literature too.

But for a topic and history that draw mankind’s reverence, how can a non-Jewish interpretation and narrative not invoke a halo-diminishing trend? Like a fraudulent depiction of the Holocaust—such as Binjamin Wilkomirski’s case—espousing fictional narratives of the Holocaust from non-actors or survivors run the risk of heresy. While fiction writers do not have to worry about the accusation of disseminating canards, they risk being dismissed as irrelevant for lacking any credibility or authenticity.

Indeed, perhaps romance will be used to tell stories of the Holocaust in the future—even bizarre platonic relationships, such as was narrated by director Barnabas Toth’s Those Who Remained.

Finally, there is the contestability of authenticating controversial Holocaust narratives. Consider author Jan T. Gross’ non-fiction Neighbors: The Destruction of the Jewish Community in Jedwabne, Poland. Gross’ non-fiction book published in 2000, investigated the July 1941 massacre of Polish Jews by their non-Jewish neighbors in the village of Jedwabne in Nazi-occupied Poland.

Like fiction, the concern here involves the mixing of somber reality that elucidates, with chimera and invented anecdotes that obfuscate. Investigations conducted in Neighbors generated acrimony and remain contested and it is difficult to filter canards from true claims of Polish people murdering their Jewish neighbors, while the Nazis supposedly did nothing but just stood by and took the photographs. The non-fiction provides us reasons why they did it—i.e. murder their Jewish neighbors: a variety of reasons ranging from wanting to appropriate their property to accusations of Jewish Bolshevism, which is an antisemitic claim that Jews were responsible for the Bolshevik revolution which overthrew the Tsar’s regime in imperial Russia, and replaced it with the dictatorship of the Soviets.

The hearsay accounts of eyewitnesses no longer available, recount stories that seem to be a playbook taken from the Old Testament pogroms and persecutions and animus against the Hebrews, such as in the Book of Esther—until the courageous Jewish queen saved her people by beseeching the favor of the king, who saved the Jews from their arch-enemy. Their ancient antagonist—like Hitler—Haman, had planned for the extermination of Jews.

The Old Testament reveals a Jewish tradition of preserving the literature of the persecutions Jews have suffered in their collective memory. What memorializing historical trauma across generations achieves is unclear. However, we have evidence of the cruelty of mankind—at least as preserved in Jewish narrative by Jews, the evidence tells us of the history of the cruelty of mankind against Jews. The persecution is further chronicled in ancient Jewish literature in the Old Testament: “My father was a wandering Aramean, and he went down to Egypt few in number and lived there and became a great nation, mighty and numerous. But the Egyptians mistreated and afflicted us, putting us to hard labor…”

The acrimonious revelations in Neighbors seem to invoke biblical themes, of envy of Jews, and persecution to appropriate their property, and the cruelty their longtime neighbors inflict upon them. Why do the biblical records of persecutions against Jews seem more authentic and believable than Gross’ record of persecution of Jews in Jedwabne by their Polish neighbors? Do more contemporary interrogations seem less disinterested than the ancient texts? Thus, would permitting new narratives and interrogations from non-Jews provide more neutrality and bestow an acceptable and universal appearance of authenticity?

Who would provide broad authenticity to new and expanded Holocaust narratives, after all the survivors are gone? There is no easy panacea as the authenticity of future Holocaust literature without its survivors seemingly stands in the balance.