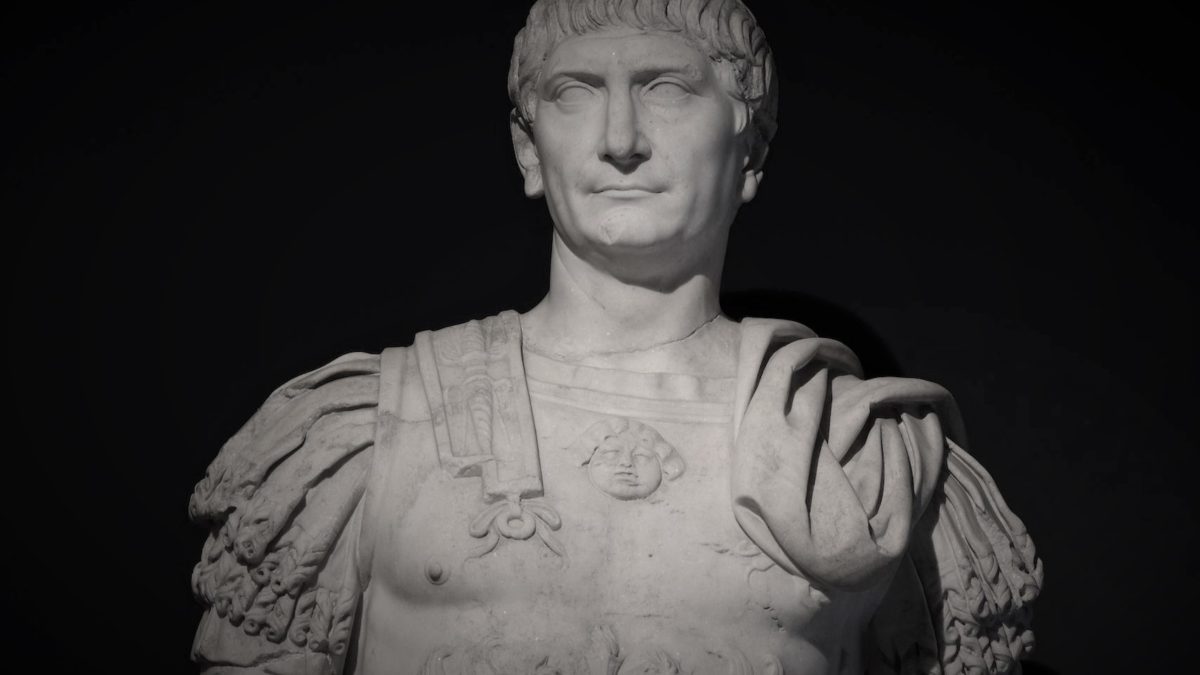 Trajan was officially declared Optimus Princeps (best ruler) by the Senate and during his reign, from 98 to 117, the Roman empire reached its maximum territorial extent. A successful soldier-emperor, Trajan executed the greatest military expansion in Roman history. However, Trajan tempered his militarism with his good relations with the senate. Trajan’s numerous letters with Pliny the Younger, who was a senator, lawyer and provincial governor, display his conscientious style of consulting with others including experts in developing the provinces.

Trajan’s beneficial ideology, by developing monuments and amenities in the provinces broke from the tradition of autonomous self-governance, and the appearance that the Romans were merely exploiting the resources of their conquests.

However, by invoking the prayers of the people in beseeching the gods for his “health and safety”, Trajan conforms with tradition. The supplication not only exhibited the allegiance of all Romans to the emperor as the embodiment of the state, but also recognized their duty in praying for the emperor and state as one, also recognizing him as Pontifex Maximus—since begun by Augustus. The prayers for Trajan’s safety also implicitly reflect the militaristic nature of Trajan’s rule. He broke from tradition by personally leading military campaigns in the battlefield.

Trajan valorized technocrats and this shows in his appointment of special troubleshooting caretaker officials (curatores), who reported directly to him, as he brainstormed with them to solve local problems. His letter to Pliny indicates this, “Steps must be taken to provide Nicomedia with a water supply.” His hands-on approach in the provinces shows not only his concern to improve the welfare of the people of the provinces, but also his conscientiousness as an administrator of finances, who shunned wastefulness. This was a departure from the profligacy of emperors like Nero.

Although Trajan’s expansionism burdened the economy, he was a prudent administrator who spent on philanthropic social welfare programs to improve the lives of the people. He completed the building of aqueducts to ensure water supply in the provinces, for instance. Importantly, Trajan’s strategic conquests of wealthy territories like in the Dacian conquests where gold and other precious metals were acquired, paid for his building projects. Rome was not left out, as the spoils “financed the great Forum of Trajan in the heart of Rome.”

Trajan’s provincial administration promoted the Romanization of the territories outside the peninsula as Roman culture was disseminated in the new provinces and facilitated integration in the empire. For instance, because of Dacia’s mineral wealth, immigrants settled in Dacia as Romans annexed the land and Dacian culture was destroyed. Dacia which roughly corresponds with modern day Romania, today retains the most Latinate language spoken in the world, and this is a testament to the Romanization facilitated during Trajan’s conquest of the area. The promotion of Romanization by Trajan is not to be taken lightly, considering Trajan himself was not born in Rome but near Seville, in present-day Spain.

Trajan’s continuation and formalization of the alimenta program did not simply support the children of Italy, but also demonstrated his moral concern for Italy’s total well-being. This quality differentiated him from bad emperors like Nero who were notorious for their improvidence.

In addition to all his building projects, in true Roman tradition of emperors since Augustus, Trajan also commissioned magnificent monuments that celebrated Rome’s military superiority, as well as glorified his excellence as a ruler. Thus, Roman military glory is displayed on the marble relief on the Column of Trajan in Rome—built in 113 AD.

Trajan’s glorious and beneficial ideology and building projects in the provinces enabled the people in the provinces to enjoy a high quality of life and to live like Romans probably did in Rome. This is epitomized in the establishment of the Thamugadi colony, in modern Algeria in 100 AD. His concern for the welfare of all Roman citizens and the integration of the empire arguably earned him the accolade of the best emperor.