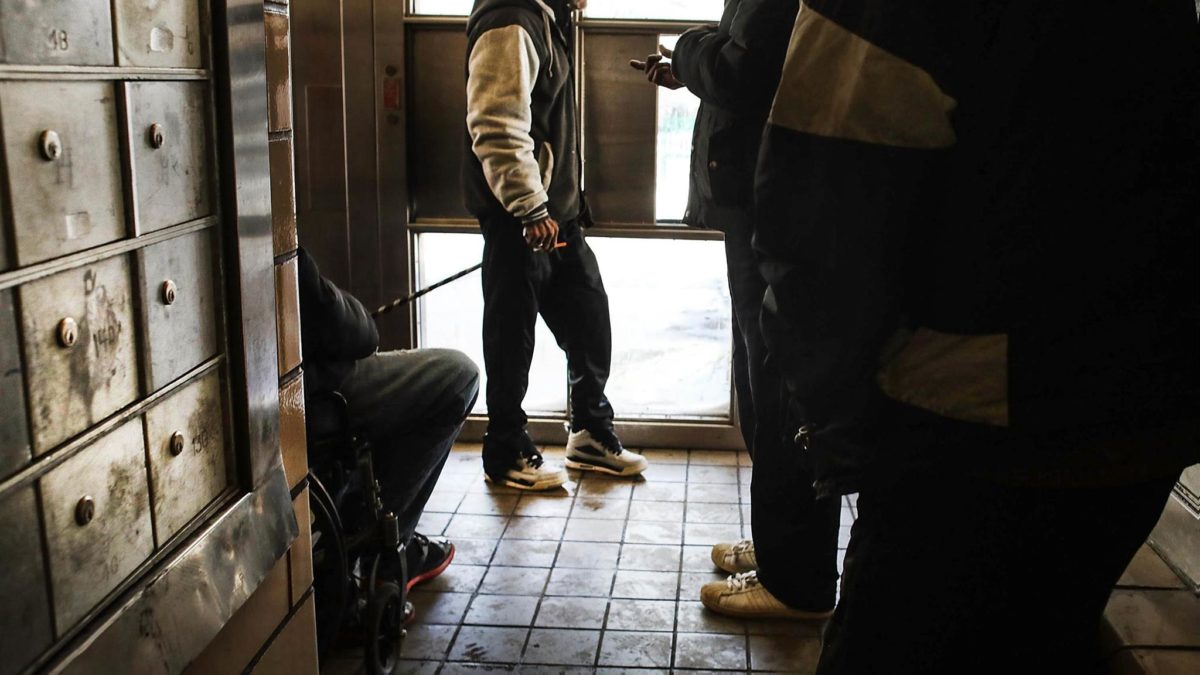 I could just imagine the newspaper headlines the next day, in the small Southern town of 10,000 inhabitants: “Nigerian students killed in ‘obvious’ drug deal gone wrong.”

“Nigga, don’t move!” Wild-eyed and waving a gun, he continued. “Don’t do nothing now, big guy.”

Musiliu, my roommate, was on his knees, too petrified to breathe and looking like he was about to cry. To save money, we’d moved into a run-down neighborhood about 10 minutes from our picturesque university campus. We let a spendthrift, Sonny, stay with us. He had no money to pay his rent.

We had seen the two men in hoodies initially meandering around the corridor before approaching our door. Stopped at our door, finally, they knocked. Sonny crossed to open it, but I stopped him.

“Chill, no fear na me dem dey find,” he said in pidgin. Meaning: “Relax, they are looking for me.” Musiliu laughed at my alarmed face and shook his head at my pusillanimity as he unlocked the bolted door. Sonny’s guests stepped in easily, smiling their hellos, and as one of them shut the door with one hand, both men revealed their pistols.

They were indifferent to drawing attention as they screamed at us to get on our knees. There was one that was skinny, and one that was obese. The skinny one pointed the gun to my head and kept saying, “Don’t move, big guy.”

Any wrong move, and that was it — he’d pull the trigger, and I’d be history. I could just imagine the newspaper headlines the next day, in the small Southern town of 10,000 inhabitants: “Nigerian students killed in ‘obvious’ drug deal gone wrong.” In America, Black men who get shot are always in the middle of a drug deal, it seems. And with Musiliu also being Muslim, it would probably be reported as a terrorist attack–cum–drug deal gone wrong.

I realized then that I didn’t really know Sonny. Everyone on campus knew he was a big spender, and that his father, who lived in Nigeria, was superbly wealthy. Sonny had a flow of cash that he used not to pay rent but rather to host recurring extravagant bashes, where Moët flowed with abandon. I remember Sonny as the Nigerian student who broke all the rules without consequences in rural Alabama.

Perched on the edge of my chair when we first met, Sonny clasped his hands, elbows on his knees, and told me he had been kicked out of the dorm because he had not paid his bills. And then he asked if he could stay with us, until his dad sent him money. Musiliu and I obliged.

Sonny’s squatting came with unanticipated costs, as I now found myself kneeling on the floor of my apartment with a gun to my head. The obese robber, who had unusually bushy eyebrows and a scraggly beard that made him look menacing, lumbered over to the house phone and yanked the cord from the wall. He placed the handset in the back pocket of his oversize jeans, which dangled just below his bottom, barely anchoring his thighs. He wobbled into the bedroom as if he expected his pants to fall off at any moment. Then he yelled, “Where the money at?”

“We ain’t joking, brah,” the skinny robber said. “Where the money at?”

I spoke up. “We have no money. We are poor students from Africa.”

“We ain’t playing, brah. Give me the money!”

The skinny, flame-eyed robber was enraged. Abruptly, he removed the gun, which had been pointed at my head…

After going through several drawers that he’d hurled to the floor of the bedroom, the obese assailant concluded: “They ain’t lying, brah. They ain’t got no money.”

“What?” The skinny, flame-eyed robber was enraged. Abruptly, he removed the gun, which had been pointed at my head, and dashed into the bedroom to check for himself. Once Musiliu noticed, the obese robber, who now looked sunken and despondent, had a soul, he started to plead with him to let us go.

“Please, bro, we really are poor students from Africa just like you,” said Musiliu, the devout Muslim. Then the skinny accomplice emerged from the bedroom with a substitute for the chimerical money. With a smug look, he consoled himself with Sonny’s expensive wardrobe. He efficiently carted off more than 50 designer shirts, jeans, shoes and colognes. Sonny was finally a casualty of his extravagant lifestyle. Once the robbers left, removing the strange miasma that had followed them, Musiliu and I discovered that Sonny, surprisingly, did not know them. He repeated this to the cops once they arrived.

About two years after the incident, I got a call from Musiliu informing me that Sonny was in a federal penitentiary, convicted for fraud after operating an elaborate check kiting scheme. But Musiliu would reveal something even more shocking: The cops and then the FBI had started monitoring Sonny and his presumed accomplices after the robbery incident.

Now it all made sense.

Just before I graduated, I had walked up to a Black man and asked him: “Are you following me? I keep seeing you, everywhere I go, and you don’t seem to be doing anything.”

“I ain’t following you, mehn,” he responded, trying to disarm me with a smile.

I wanted to dismiss it as my having read too many Robert Ludlum novels, causing me to impute significance into mere coincidence. But the man had been standing at the store next to the office where I interned; he had been sitting in a parked car right next to mine at the Walmart. And then there he was again, leaning on a railing on the second-floor veranda facing my apartment, with that annoying toothpick in his mouth, without a care in the world.

I said goodbye to Musiliu, hung up and typed Sonny’s name into Google. Musiliu was right. It was a big story. Sonny had made almost a million dollars manipulating those small-town residents, some of whom had become his accomplices. No wonder the robbers kept asking, “Where the money at?”

I remembered the times I had paid for Sonny’s meals while I struggled to get by on minimum wage and pay my way through school. Turns out the teenager I was helping out had almost a million dollars stashed away.

Just goes to show, you never know what a stranger is worth.

*** This article was originally published by the author in OZY on April 13, 2018

Bonfire for the Thieves