Home > Philosophy > Spontaneity of the Masses: The theoretical dichotomy between Lenin and Rosa Luxemburg 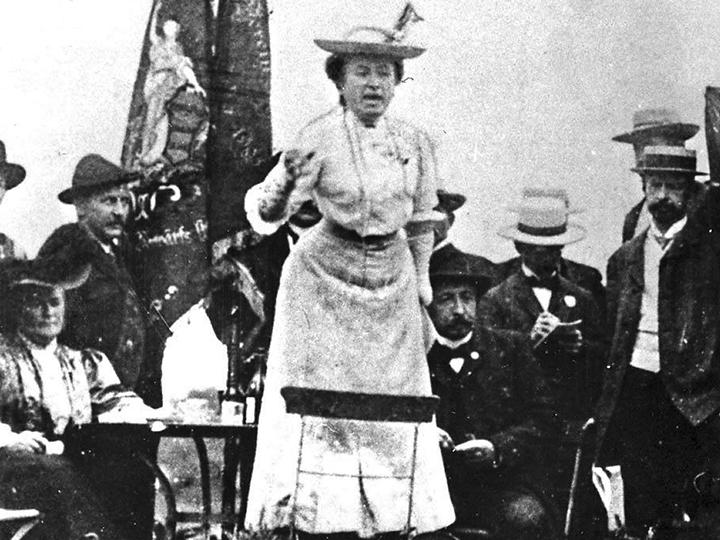 founders of modern socialism, Marx and Engels, who belonged to the “bourgeois intelligentsia”.

In his book “What Is to Be Done?” (1902), Vladimir Lenin argued fiercely against revolutionary spontaneity, the spontaneous revolutionary potential of the masses, as an erroneous concept that takes away the disciplined nature of Marxist political thought and leaves it ineffective and susceptible to failure. Rosa Luxemburg’s “Organizational Questions of The Russian Social-Democracy” (1904), published right after Lenin’s book—but also before the Russian revolution—would become the main literary criticism against Lenin’s perspective. In this essay, we will analyze Lenin’s original work, Luxemburg’s critique directed at it, and ultimately Lenin’s reply to her criticism. The arguments presented by both authors will be put in juxtaposition so that we can better understand the dichotomy regarding opposing views of the said spontaneity of the masses in social-democratic theory.

In the second chapter of “What Is to Be Done”, written by Lenin over a decade before the Russian revolution, the Russian revolutionary first introduced the idea of a spontaneously induced strike by describing the nature of what was happening in Russia in the 1890s. He believed that it was this strike movement that must primarily be regarded as spontaneous. However, Lenin describes the spontaneity of this period of strikes as consciousness in only an embryonic form. When compared to the revolts that preceded it, which were described by Lenin as forms of mere turmoil, the strikes in Russia of the 1890s did show a better flash of consciousness: precise claims, and, in short, a more systematic approach. However, although progress was made, the movement remained essentially spontaneous. There was still no Social-Democratic consciousness among the workers. He argued that history proved that the working class, exclusively, is only able to develop a trade-union consciousness: “the conviction that is necessary to combine in unions, fight the employers, and strive to compel the government to pass necessary labor legislation, etc.” Socialist theory, however, could only be erected by the more educated propertied classes. Lenin illustrates his point by citing the founders of modern socialism, Marx and Engels, who belonged to the “bourgeois intelligentsia”. Besides, he argues that in the case of Russia it was not dissimilar. The theoretical doctrine of Social-Democracy ascended autonomously from the spontaneous rise of the proletariat movement, as a “natural and inevitable outcome of the development of thought among the revolutionary socialist intelligentsia”. In summary, before the conscious doctrine gained strength, the strikes taking place in Russia were merely a product of trade-unionist struggles, and not yet a truly Social-Democratic struggle.

Lenin’s belief that the working class could independently develop strong trade-unionist politics, but not a social-democratic consciousness, antagonized his criticism toward Rabocheye Delo, the so-called union of Russian Social-Democrats, Rabochaya Mysl, the movement’s newspaper, and, more broadly, Economism, which Lenin describes as a term that can be interpreted as a synopsis of the trade-unionist movement. More specifically, Lenin criticized their belief that the strength of the movement relied solemnly on the awakening of the masses. The failure of the “Economist” enterprise was used as an example by Lenin to show that the Social-Democrats of that period lacked revolutionary experience and practical training and therefore could not meet the requirements for political action of the time.

In summary, he attributed the Economist’s failure to two erroneous practices. First, the absence of consciousness in their movement, or, in Lenin’s words, their lack of revolutionary experience and organizational skill. Second, their “slavish cringing before spontaneity”.

In summary, Lenin’s main argument was that combating the idea of spontaneity needed to be the main social-democratic task. Steering away from this tendency would be the only way to allow the movement to evolve into a revolutionary social-democracy. He concluded his remarks on the ineffectiveness of simply relying on the spontaneity of the masses by arguing that the reason why a revolution had not yet been concretized was that the revolutionary movement would not be materialized while it lacked revolutionaries.

The establishment of solid revolutionary leadership, according to Lenin, lagged behind the upsurge of the masses. Although this movement spread throughout Russia with uninterrupted endurance, it was not enough to spark a revolution because it was not able to establish a leadership organization capable of fomenting the whole movement.

Lenin’s perspective was directly confronted by Rosa Luxemburg in her book titled “Organizational Questions of The Russian Social-Democracy”. The revolutionary author from Poland argued that the problem was not rooted in the inadequate preparedness of a revolutionary intelligentsia for their role or the absence of an “all-powerful central authority in the spirit of Lenin’s plan”. On the contrary, she argued that such an authority would even increase hesitancy in socialist party committees provoking a “split between the tempestuous mass and temporizing social democracy.” Luxemburg also presented a vivid response to Lenin’s remarks underlining the importance of the creation of a revolutionary leadership. In her view, the main features of the social-democratic tactic of struggle are not to be “invented”: on the contrary, they are the natural product of a “continuing series of great creative acts of experimental, often of spontaneous, class struggle”.

Luxemburg wrote that the “unconscious precedes the conscious, the logic of the objective historical process precedes the subjective logic of its agents”. The author extended her criticism toward Lenin’s emphatic praise for leadership by accusing it of being inherently conservative, adding that the role of the social democratic leadership “has an essentially conservative character because, as experience demonstrates, once they have won new terrain for the struggle, they will work it over thoroughly and soon turn it into a bulwark against further innovation on a greater scale”.

The Polish author claimed that the essence of the ultra- centralism advocated by Lenin was infused, not with a positive nature, “but with the sterile spirit of the night-watchman state”. Adding that his line of thought was primarily concerned with the control of party activity and not with its dissemination, “with narrowing and not with broadening, with tying the movement up and not with drawing it together”. Luxemburg buttressed this criticism by stating that associating the proletariat and the non-proletarian socialist intelligentsia was an “ideological banner beneath which (…) the pure ‘economism’ of the former Petersburg Rabochaya Mysl and its translation of trade-unionist narrow-mindedness” made its way into Russia. By stating that separating opportunistic tendencies from the intellectual element would be a grave sin against Marxism and its “historical-dialectical” means of thought, Luxemburg is indirectly, but clearly, accusing Lenin of committing that sin.

Ultimately, Luxemburg believed that any mistakes committed by a legitimately revolutionary workers’ movement would be “immeasurably more fruitful and more valuable than the infallibility of the best possible central committee”. Luxemburg did not accept Lenin’s faith in centralism, but mainly the fact that his position seemed to disallow confidence in the spontaneity of the proletariat. Because she published her work after “What is to be Done” had already been published, Luxemburg had the opportunity to address the remarks made by Lenin in a direct and therefore more comprehensive form, and she took the opportunity vigorously. However, when Lenin had the opportunity to write a direct reply to Luxemburg and address the “Organizational Questions of The Russian Social-Democracy” he failed expectations. First, he wrote an oddly cordial introduction thanking “Comrade Luxemburg” and other German comrades for paying attention to Russian party literature. Following that, Lenin stated that “Luxemburg’s Neue Zeit article does not acquaint the reader with my (Lenin’s) book, but with something else” (Lenin, Reply by N. Lenin to Rosa Luxemburg).

However, in this reply, titled “Reply by N. Lenin to Rosa Luxemburg” he chose not to address the spontaneity of the masses at all. Instead, he devoted his response to tackling her statements about his apparent view on maintaining a central committee and completely deflecting Luxemburg’s criticism toward his theory about the spontaneity of the masses.