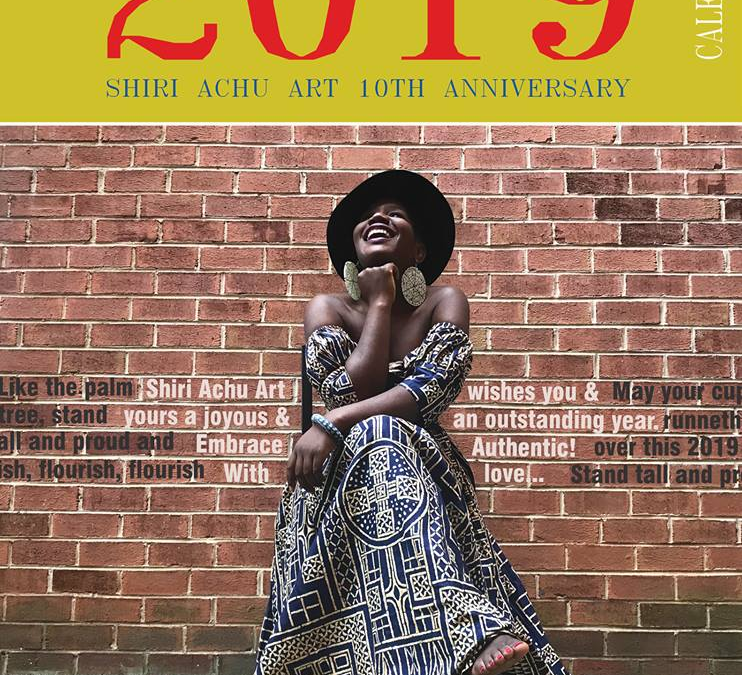 Shiri Achu was born in Cameroon, West Africa. She and her family immigrated to London, where she lived for many years. Today, she has studios in Cameroon, the UK and the USA, where she is currently based.
After obtaining an A* and A at GCSE and “A” level Art, she went on to study Architecture at Cardiff University. Since qualifying as an Architect, Shiri longed for her paintbrush and has been actively pursuing her passion of painting. Her preferred mediums are acrylics, but she works with oils and with mixed media too.

Shiri Achu’s art comes from every day, unsurprising, yet unexpectedly vivid, moments, times, and places. She is reputed to capture the spirit of her subjects and make them come alive through form, color, texture, and tone.

Shiri’s paintings reflect the beautiful simplicity of Africa and she offers this to the western world to encourage understanding of the culture and interest in travel to African nations. Shiri loves also to paint carnivals scenes. Showcasing the colours, the movement, the moment. She aims also to bring joy to homes!

Five years after The 30th Act, Shiri’s first solo exhibition, 35InPrint:London exhibition took place from April 19, 2014 and during the one week long exhibition, the mayor of Harrow attended along with the late Mr. Barry Lord (Shiri’s mentor and museum designer of the new Smithsonian African American museum).

36InPrint:DC exhibition kicked off with Shiri attended a discussion group on “Champions of change for expanding fair chance opportunities” at the White House and ended with a recognition letter from Congressman Chris Van Hollen, “…in presenting the inaugural 36InPrint Art exhibition and with appreciation for using art to capture the spirit of African culture in our community.”

Shiri has been privileged to exhibit and talk about her paintings at The Commonwealth Secretariat in London, The Houses of Parliament, The African Village at London Olympics 2012, and also the BBC TV show “Show me the Monet” after her painting “Rose” was shortlisted for the show in 2012.
US art critic Lennox Campello chose her works as TOP 10 at the Artomatic 2016 art exhibition, where hundreds of artists come together under one roof, over several floors to exhibit. In his write-up, he states, Shiri Achu’s art is “Powerful African Art in a marriage of contemporary skills with strong African imagery…” Lenny Campello

Shiri Achu Art is also owned by many other collectors who buy from her website, at art fairs, group and exhibitions and also from those who buy from The Smithsonian, the museum store of National Museum of African Art.
Shiri Achu’s Art is gripping and engaging across the globe. Her works have been and are continually sought after all over the world. Her works have been featured in several magazines, newspapers, blogs, and the book, International Contemporary Masters VII, published by World Wide Art books Inc, pages 64-65. Also, The Smithsonian (The shop at the National Museum of African Art) orders, and sells out of, Shiri Achu Art limited edition prints.

When Shiri receives messages such as this, “I can recognise your art as beautiful because it makes my heart want to smile” Samir Malik 08/2012, she is encouraged to keep working hard and motivated to keep making hearts smile. She is grateful and thankful for every encouragement and opportunity that enables her to keep painting. She is grateful for the opportunity to mentor young people in London, Cameroon, and the USA.
Shiri is extremely pleased and excited that she is achieving one of her goals of promoting the African Culture worldwide, through her art works, workshops and her annual worldwide exhibitions.

– Exhibition in Chiang Mai
Shiri Achu Art invited to exhibit in the beautiful courtyard on Saturday 8th and Sunday 9th of March – Shiri Achu Art exhibited at TedxEuston Salon 2014 – Ripple Effect: Education and the Next Generation ON Saturday 21st June at The British Museum

– ShiriAchuArt in a Short Film. ‘Where Are They From?’ by Suki Mok and Liz Chi Yen Liew

– Omar, British soul singer, songwriter and musician, (recently appointed Member of the Order of the

– Exhibited at The African village during London Olympics 2012. Football legend Roger Milla with his signed print ‘Along 2’

– Solo exhibition at The Tabernacle in London’s Notting Hill which saw Mr Rudolph Walker and Richard Blackwood coming to the exhibition.

– Exhibition at the Houses of Parliament for BAAC. 7th Nov 2011.