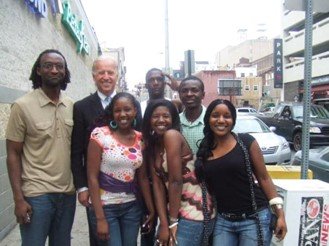 Ecstatically, we tried to wake our big brother up from his deep slumber. It was 3  in the morning. We had just driven to his flat—ok, apartment—in North London and we had an early morning flight to catch.

“What are you guys doing here?” he said pulling the blanket back over his body. “I’m sleeping and I have work in the morning!”

My sister and I looked at each other and burst out laughing. No, he didn’t. We had already planned everything to a tee! We had talked with his colleague, who spoke to HR and helped us take a week off from work for him. We had his roommate prepare his passport and he was ready to drive us to the airport. All he had to do was get up, pack a few things, and head out with us to Heathrow airport to catch our business class flight to New York City! It was the 4th of July 2007 and my big brother was turning 30 years old—on America’s Independence Day.

He scratched his head, confused during the entire trip, not seeming to believe what was happening and still perplexed about what was going on. When we landed in New York City, behold, my sister and I had arranged for family members and friends to meet us at the airport; then we dined somewhere fancy and later enjoyed fireworks for his 30th birthday.

The day after, we decided to head out to Philadelphia where a family member lived. Another beautiful day, great company, food and my brother by now believed he was having a wonderful time. We decided to take a walk around the neighborhood and to explore America some more. And who do we bump into? Lo and behold! It’s Joe Biden. Casually walking to Greyhound with his sister was the then Senator from Delaware, Joe Biden. He was gracious and warm, with a constant smile adorning his friendly face. He greeted us all with firm handshakes, chatted with us and then took time for a picture with us. There was something soothing in his presence that put us all at ease, because he was so natural and just seemed like a regular, unassuming man. His sister was also kind enough to take our photo with the senator! How cool, right?!

Two years after the picture was taken, Joe Biden became the Vice President of the United States, with the historic election of the first Black President of America—Barack Obama. Today, Joe Biden, that warm gentleman who was not too busy to take an impromptu photo to celebrate with my brother, is America’s President-elect. What an incredible journey he’s had as a public servant. Because I had a photo with Joe Biden as a memento, I religiously followed his career from Delaware Senator to the White House. I mourned his loss, when his son, Beau, died of cancer.

And now I celebrate his comeback as America’s 46th President, ready to unite a divided country. I feel so blessed to have been able to follow and witness it all. Having met Joe Biden those many years ago, I started my very own personal campaign urging people to vote in the wake of kicking off his 2020 campaign for President.

As an artist, I did this in the only way I knew how. First, I created the art. The painting of an older man, with an ambiguous ethnicity who could pass for Indian, Spanish or mixed race, wearing a mask. I wanted to highlight the period in which this election took place, and how the mask protecting us from the pandemic became the signature feature of Joe Biden’s campaign, as Donald Trump spread pandemic denial.

Next, I inscribed the four-letter word, VOTE and shared the painting throughout my social media platforms just before election day, simply to motivate people to go out and vote.

Waiting and anticipating the election results, I had planned to do one final thing but only if Joe Biden won! And finally, with the projection that Joe Biden had been elected the 46th President, on Saturday November 7, I was thrilled to change the wording from “VOTE” to “I VOTED”!

Amid the Covid-19 pandemic, I started creating postcards for checking-in with your loved ones. I recently held a “Send Me A Postcard” competition in which 5 diverse winners were chosen from London, Cameroon, Dubai, Maryland, and Memphis in the United States.

I’ve now created check-in postcards for this painting which can be purchased and sent to a loved one or kept for posterity. Just like I keep my photo with President-elect Joe Biden for posterity.

To purchase, please visit this link;

What a year it has been. Praying for protection for you and your family today and throughout the Covid-19 pandemic. Oh, but before I sign out, did I mention he was gracious and warm and patient? Well, he was. We took several pictures—and to think we were just random strangers that caught him on his way to the Greyhound!

Good luck Mr. President! Shiri Achu Art wishes you all the very best as you embark on this historic journey as the 46th President of the United States of America with Vice President Kamala Harris—another historic milestone. I feel it personally that I have a memento of the man who was gracious to take a photo with us, and he was the man with the audacity to pick the first Black and first woman to be Vice President of the United States.

I have now shown my family’s photo with a grinning Joe Biden many times to my daughter, pointing out the President who paved the way for a female American Vice President, because he had faith in what women can do, when given the opportunity. My daughter, like so many Black girls, can now believe she too can be Vice President of America, if she wants to be. My daughter can believe she has no limitations as an American citizen.

I will be praying for their families as they embark on their historic journeys to unite America. And as the President-elect would say, “Keep the faith!”