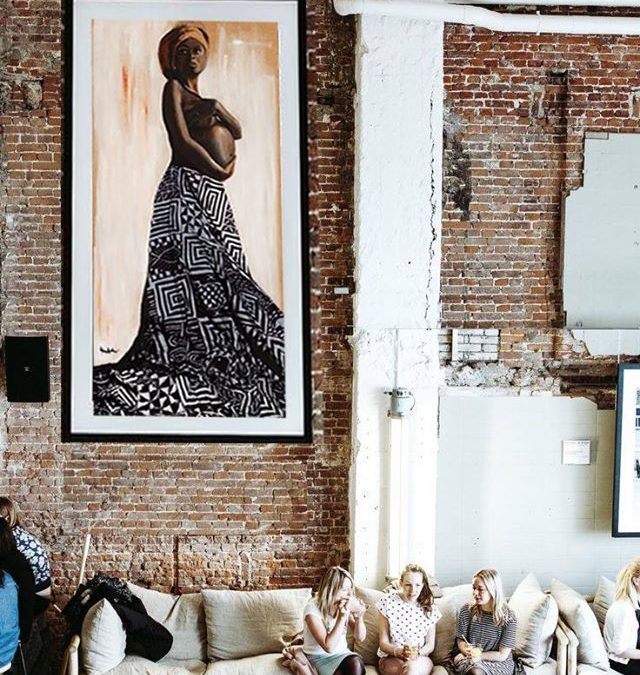 I watched her for a few hours and knew I needed to paint her. Full of dignity and pride, she was a beautiful woman. I felt it was important to keep the baby bump exposed and drape her from the hip down. She stood, strong and elegantly for me, as I draped her majestically with a cloth commonly known in Bamenda, (in the northwest of Cameroon) as the ‘Ndop’. I felt it was important to express, or rather, with subtlety, imply her roots in the painting.

I was invited to exhibit my pieces at the commonwealth secretariat in London on December 6, 2011, to commemorate human rights week— with the theme of empowering women through art. This was one of the pieces chosen to be exhibited. Indeed, it was an honor to be there.

Then there was a call out for artists to submit their paintings for a BBC2 TV show titled ‘Show me the Monet’. I took a shot and entered ‘Rose’, which then, was one of my newer pieces.

A few months passed and I received a call informing me that I had made it through to Stage One Selection and ‘Rose’ was one of the artworks selected out of 3,000 entries, and now whittled down to 300 by art critics. Following this was Stage Two, where I was then called in for the audition day, which was a meeting to talk about myself, my work and my inspiration, etc.

A month after Stage Two audition day, I was called again and advised I was through to stage Three—the ‘hanging committee’; and I was one of the 150 selected for the ‘Show me the Monet hanging committee’…Whooohooo!!!!  I went for the TV interview and discussed the pieces with the three art critics. Now the piece was to be judged on three categories: the originality of the work, the technical skill of the artist, and the emotional response evoked by the work.  I recall the judges saying that the piece had emotional content and was original and at the time, they had valued the piece at over 4,000 pounds (the show was aired on Wednesday, July 18, 2012 at 3 p.m. on BBC2), but unfortunately I didn’t make it through to  the final stage—Stage Four—which was the exhibition and sales portion in which the final 80 who made the cut would have their works exhibited and possibly purchased by patrons.

In retrospect, I realize that I didn’t defend my piece well enough when I was asked about the length of her cloth which flowed all the way to the ground and trailed behind her. Perhaps the judges did not understand what my intent was and what I was trying to portray and communicate with the long flowing skirt of the elegant African woman carrying a child. Indeed, it was my job to articulate my intent to the judges, but I had my work cut out for me because the Eurocentric judges may have lacked exposure to the intricacies of this kind of art, making any interpretation difficult to appreciate.

However, I was glad and honored to have made it to that stage of the competition and grateful for the airtime my painting got. There has been a gradual shift in consciousness in the West regarding art of African origin which has repositioned it from a mere cursory observation of the quaint and the bizarre, to serious qualitative and reflective art requiring deep scrutiny. However, there is still far more to be done. As an artist and relentless advocate of the African heritage and culture, I will continue to work tirelessly to effectively articulate African art so that it assumes the veneration and respect it deserves globally.

Art may be subjected to varied interpretations; after all beauty they say, is in the eye of the beholder. Some friends have interpreted the flowing gowns of African women in the attire they don, as symbolizing modesty, since the body of an African woman, powerful and imposing in its natural form supposedly exudes strong sexuality that captivates and allures. The big flowing gowns are said to temper that luxuriant power which is exuded with a cloth of modesty and leave her appearance unexceptional rather than flamboyant.

However, I interpret the traditional flowing gowns as reflecting grace and majesty. The abundance of material does not connote an understatement but a certain richness, like royalty.

What are your views on the painting? If you are in the neighborhood of Washington, DC  I will be exhibiting this piece at my 10th Anniversary Exhibition: The 40th Act – Part 2, at The University of the District of Columbia (UDC) from Tuesday December 3 through to Saturday December 7, 2019, at Gallery 42, Building 42, Room A-12. I will be available and happy to discuss ‘Rose’ and my other paintings on Tuesday from 5 p.m. to 8:30 p.m. and Saturday from 10 a.m. to 6:30 p.m. See you there!

How Pius Adesanmi arranged his daughter's birthday after death