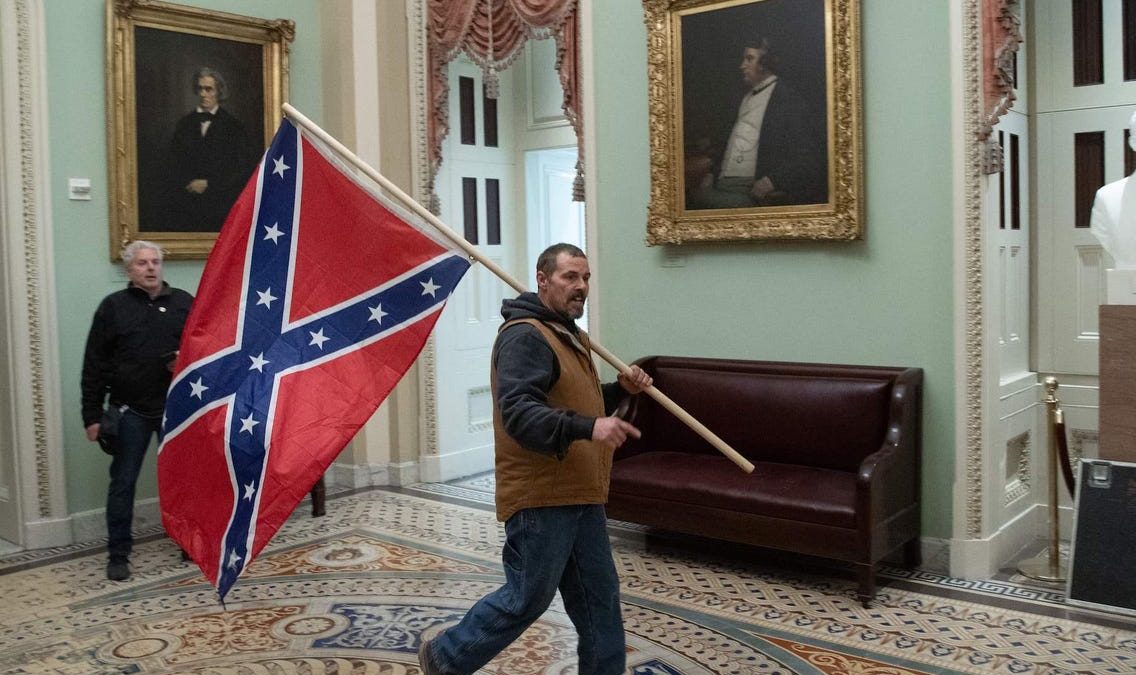 The whole world except America’s caviar chugging, wine swigging elite knows the implications of what happened on January 6, when a mob instigated by Trump took over Congress. America’s elite which has always closed its eyes to the travails of common Americans and stuck up its nose at minorities and Black people, is playing ostrich. It is the manner of the elite. They ignore disagreeable situations and wish them away and then pretend there is no problem.

The quietly dismissive way of the elite is reflected in a January 8, 2021 article, a piece of vacuous claptrap written by Wall Street Journal’s editorial board: wishing that Trump “goes away quietly,” like just fade away like an apparition does on a stage. But Trump isn’t just some ghostly figure. His unhinged actions, diatribes, lies and incitement have left real consequences and marked American democracy no matter the amount of mealy-mouthed platitudes aired by the media of how enduring and resilient American democracy has proved even while trampled on by Donald Trump.

America has never been where we were taken on January 6. I have often bragged about how America has never had a coup. We typically think of coups as perpetrated by the military (as they often are in developing countries like Nigeria) using force to seize power from an incumbent constitutionally elected president or legitimate ruler.

However, in this case it was the constitutionally elected US President who instigated a coup attempt against not just a newly elected President (elect) by trying to overturn the elections the incumbent lost, but it was also a show of force against a co-equal arm of government–Congress. One of the things dictators who seize power through coups do is to intimidate and suspend the lawmaking body, legislature or in our case Congress.

Napoleon Bonaparte did it in France. Many military dictators have done it in Nigeria. By intimidating and then suspending the legislative body, the dictator becomes the absolute law of the land.

America is on a precipice. Especially for a country whose laws are informed by precedents. A coup attempt occurred, without consequences for the instigator and perpetrator–President Donald Trump. The precedent has been established for another coup attempt, that will perhaps be more efficacious than Trump’s erratic nudging. America’s elite seem blind to the fact that historically failed coup attempts have been precursors to more effective takeover and ultimate authoritarian rule by a dictator that has learned from earlier failed coup attempts.

In 1923, Adolf Hitler instigated a failed coup for which he was handled with kid gloves by the authorities who released him from prison after serving just one year of an initial 5-year sentence. During his time in prison for the attempted coup, Hitler assumed rock-star status, writing a volume of his autobiography “Mein Kampf” all of which propelled him to become massively popular. Upon release he was later called on to form a government as Chancellor in 1933, and to eventually assume absolute dictatorial powers in 1934 as Fuhrer.

Dictators and coup plotters are not made so overnight. They gain success after earlier failed coup attempts. While America’s case does not necessarily parallel the Third Reich’s, I can see close parallels to my country of origin, Nigeria, with its litany of coups and failed coup attempts and the authoritarian rule of dictators.

Like in America, the first coup attempt in Nigeria was a failed one. And just like it happened in America, it happened in January. On January 15, 1966 a young charismatic major in the Nigerian army, Chukwuma Kaduna Nzeogwu, led about a dozen other majors to kill in cold blood, the Prime Minister of Nigeria and other high-ranking officials, servicemen and their wives. They were ostensibly dissatisfied with alleged corrupt elections and the flamboyance of corrupt politicians.

In no time, the attempt of the callow majors to seize power was foiled by a more experienced general who forced the coup plotters to surrender. The highest-ranking officer in the army, Major General Johnson Aguiyi-Ironsi would suspend the constitution two days later, once a cowered civilian cabinet had relinquished power to the general, who became the military dictator on January 17, 1966.

The young majors who plotted the failed coup attempt were arrested, however, they were treated with kid gloves by the government of the opportunistic dictator, Aguiyi Ironsi—who had not been involved in the planning of the failed coup. General Aguiyi-Ironsi had only come into the picture after a pusillanimous civilian cabinet who felt lucky to be alive, considering the slaughter they had witnessed, “voluntarily invited” the general to form a government after thwarting the coup attempt.

However, the young soldiers now saw that government could be seized with more deliberate planning and backbone. And on July 29, 1966, six months after Nigeria’s first coup d’état failed, a second coup occurred, and this time it was successful as the actual coup plotters seized power for themselves.

We can liken coups to the recalcitrance of children. Once a kid misbehaves and he is not punished for his offense, he is emboldened to show less restraint in the future. He does it again and even pushes the envelope.

America’s democracy had endured for almost a quarter of a millennium without the travesty of a coup attempt, like the one that happened on January 6, 2021, when a ragtag mob instigated by an unhinged sitting president unable to deal with the reality that he would no longer have power in two weeks’ time, took over and ransacked the Capitol. It seemed like a truncated Storming of the Bastille, which led to the end of the Ancien Regime and the French Revolution in France.

I came to America over two decades ago, because I wanted to learn from American democracy which I believed was the sacrosanct, tried, and tested model that Nigeria should learn from and be fashioned after. Institutions that withstand the test of time are often inextricably linked with symbolism.

The symbolism of the sanctity of the US Capitol and Congress has been violated. Those who vandalized Congress were not foreign invaders. The image of America’s elected lawmakers fleeing and hiding from a wild rabble of Americans invading the once inviolate halls of Congress, ransacking their offices, and despoiling the Capitol’s antique furniture and totems has been captured forever on film, in video and in photos. We cannot unlive it. Sometimes the people may commit the abomination of violating the shrine and the temple we hold sacred.

Punishment for committing an abomination must be swift and severe, otherwise the temple and its symbolism will no longer be sacrosanct in the eyes of the people. There are barbarians at the gate that Donald Trump led in. The Republican cabinet often browbeaten by a wannabe tinpot dictator, Donald Trump, can rise to the occasion and nearly redeem itself by doing its duty and invoking the 25th Amendment to remove an unhinged President Trump from office. Trump must be removed from office even though the instigator of the failed half-baked coup has less than two weeks left in office.

Make no mistake that while the attempted and seemingly winged coup failed, the symbolic damage was done. Punishment and accountability will blunt the severity and long-term fallout from the damage. While we know there is just no time to impeach the outgoing offending president in ten days, it is still no excuse to pussyfoot.