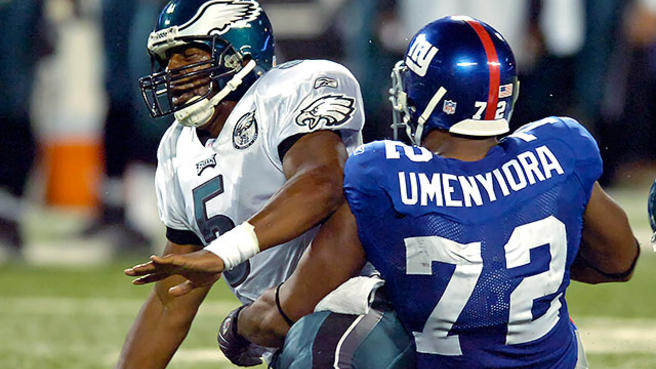 I am watching the articulate young man speaking with passion on television, as he incisively repudiates President Trump’s denunciation of athletes exercising their First Amendment rights in order to protest racial injustice. I recognize him, recalling memories from our school days, like it was yesterday. The speaker on BBC Sport is my fellow Nigerian and fellow Trojan…not the one, sold in every pharmacy and convenience store in America, which you may know too well, but “Trojan” as in Troy Trojans Football of Troy University in Troy, Alabama Trojan! Osi once walked up to me and asked, “Are you Nigerian?”

We became bowing acquaintance “friends” afterwards always with a hug, and a conversation, and wishing each other the best anytime we saw each other. But we were always too busy to hang out – I with my 1,001 jobs, combined undergraduate Accounting, and MBA – no time at all. And he of course, was busy winning football championships for Troy.

I took summer classes every year I was in Troy. It meant I got to cook and serve the football team in the cafeteria. I would see Osi when he came down the line, and I recalled seeing how tough and strong he was. One of his teammates while joshing around had decided to test his strength in a shoving contest. Just one push back from Osi had him cowering. From the throaty laughter of the instigator who’d just been bested, you could see they were fond of each other.

But as a true Nigerian, Osi also worked during summer, when school was off, as I remember seeing him lifting and moving tables in the Trojan Arena, the university’s multi-purpose building. He had a simple old American style car that I heard got stolen. And as was his custom, when he saw me, he stopped for a chat. I had learned he played football for the school – and that he was really good. Believe it or not, although as students, we got free tickets to my school’s football games in our very impressive state of the art stadium, I had set foot in it only once: when I cleaned out all the concession stands and the stalls on my own, during winter, when all students were on holiday. I had worked for a company, called Sodexho Marriott, which managed the facilities and food services of Troy University, which I attended full-time.

At other times, when I worked as a chef for the school cafeteria’s international line, he stopped to have a conversation with me. And when he found me there again in the computer lab at night, he acknowledged, “You work hard!”

Nonetheless, working menial jobs at over 60 hours a week to pay the cost of a full-time American university education is a thankless job, with lots of sleepless nights. You simply do what you gotta do.

But from what I learned later, Osi worked even harder—or at least got the accolades for his hard work. He set the school records in “tackles for loss in a single season and sacks in a single game. He holds the record for the second-most sacks in a season, in the NCAA-Division I.” For his impressive feats, Osi was inducted into the Troy University Sports Hall of Fame in 2014.

I realize the preceding “records” might as well be Greek to our soccer loving Nigerians, who know nothing, nor care about “American Football,” which makes it all even more impressive considering Osi did not start playing football until the last two years of his high-school, after emigrating from Nigeria to America.

In his last year, we ran into each other as he lifted tables on campus, and he told me he was waiting to get drafted. He asked me what I wanted to do, and I said I planned to go to law school, since my passion was to be an advocate for others. We joked about me becoming his agent to represent him to get great deals. However, as it turned out he didn’t need me, as he must have represented himself exceptionally well, given the mouthwatering contracts he secured playing in the NFL. I never saw him again after Troy University.

We both graduated from the business school, at the same time, he from the undergraduate program, and I from the MBA. As I was picking up my diploma (the one the Chancellor hands you is not the real one – that is simply for show – for the photos), the ladies issuing them were all smiles with me, treating me “extra nice.” Eventually, when it was my turn, I realized why, as one of them asked:

“It’s you isn’t it? The Nigerian that got drafted?”

“It’s you isn’t it? The Nigerian that got drafted?”

They confused me momentarily with my compatriot, Osi Umenyiora. I told them it was not me, and they explained to me that my fellow humble Nigerian had been drafted by the New York Giants. Indeed, it was exciting news! Although I did not know who they were, since I did not watch the sport.

However, the next time I heard about Osi Umenyiora was at work. After graduating I was fortunate to eventually become a stockbroker at Bank of America, then the second biggest bank in America. A colleague put it all together one day:

“You’re Nigerian, didn’t you graduate from Troy University that small school in Alabama in …dude, you must know Osi Umenyiora! You should get in touch with him dude. That’s a huge account to have!”

He went on to win two Super Bowls and set more personal records and reportedly earned over $11 million a year at the peak of his career. He did not fair badly as a catch either – he is married to former Miss Universe.

You should have seen how happily Osi drove his old American ride like it was a Bentley, when he was a student at Troy. After he got the deal, the whole campus heard of how he bought his parents a Benz as a “thank you” gesture.

As far as I know, Osi did not come from a family with money. America gave him an opportunity to make money and to achieve. I do not think he denies that. But the noble traits of America, made him nobler too. That is why he, like the other athletes peacefully protesting racial injustice and police brutality, can call out structural inequities in a noble nation and ask that the nation separate itself from any extant stains, by correcting such inequities. It is not about saying ‘no country is perfect,’ therefore business goes on as usual.

Because America means something much more. For those able to achieve the American dream, to those too weak or vulnerable to have a voice, America “should be” a land of justice for all. Many immigrants like Osi Umenyiora, have been able to experience the greatness of America. But many Black Americans are yet to even realize, what it means to be a citizen in a country that beckons and gives so much hope and fulfillment to “outsiders.” But we are all outsiders in America, a constitutively immigrant nation. And it is with the vantage point of looking from outside in that Osi righteously calls for equity (equality).

On one occasion, I had led the catering service for a Trojan football team event in Sartain Hall—the university’s multi-purpose arena at the time. I was told that we were hosting an alum, who’d played for the Dallas Cowboys, and his teammates were going to be around to watch the school honor him. Back then, I went to work at the catering events, to make the extra money I used to pay for school—not for the highlights.

My childhood friend, Musiliu, who attended Troy with me was serving, too. He had joked in our native Yoruba, that the famed Troy football head coach, Larry Blakeney had been looking at me.

“Boya o n wo ige e. O fe ki wo naa join team”, said Musiliu. Meaning:“It appears he is scouting you and examining your muscles, perhaps you may join the football team.”

The coach did come over. He smiled and with one of the strongest grips I can remember, he shook my hand. Shortly after, another famous person came around to get drinks, which I served him. He also shook my hand with a vise-like grip. But this time, he stayed to have a conversation with me. He had been wearing a massive ring, which I had not paid attention to, as he asked me my name, and if I played football. He was surprised to learn I did not, since he said I had the build for it.

Then he asked me what I did. Then I told him, I was an MBA student. At which point, he said to me, “Good job. Stay focused.” He did not say anything about football after that.

After he’d walked off, people came around to me asking what the somewhat short, stocky former Dallas Cowboys star had said to me. They kept saying, “Did you see the size of that ring, on that man’s finger?”

After five degrees, including one in law, I wonder why I remain unmoved by material things? What can I do with my love of learning and passion for social justice? Advocate for those whose victimization, the star athletes bravely refused to wink at. Like Muhammad Ali, Tommie Smith, and John Carlos before them, they have leveraged their stardom to take a righteous stance against injustice in America. It has been a few years since Colin Kaepernick first took a knee, exercising his First Amendment rights to speak against police brutality. It has been a few years since Osi defended him on television. And there has since been a groundswell of nationwide and global protests since the police killing of George Floyd, in callous yet pedestrian fashion in the middle of a pandemic, in broad daylight.

Binary likely: The 'unchanging' normative for Caster Semenya and others