Home > Opinion > My teen friend was an early victim of SARS, the crooked cops 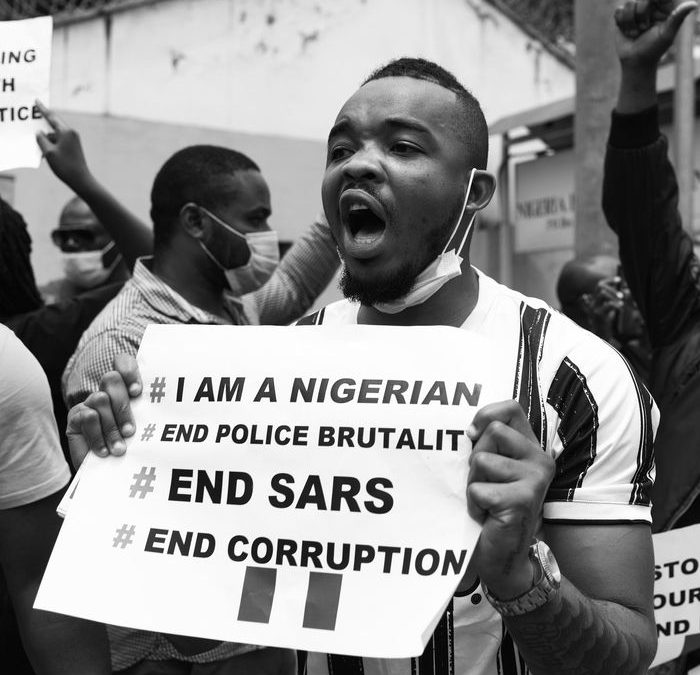 A few days ago on October 20, I received an article on WhatsApp from a childhood friend. It was a story of another childhood friend, who was one of the first publicized victims of Nigeria’s notorious Special Anti-Robbery Squad (SARS). This was long before celebrities like Diddy and Rihanna had supported the hashtag decrying Nigeria’s killer cops. The article was captioned, “#End SARS: The Forgotten Story of Bola Afilaka.”

After weeks of protests by Nigerian youths being robbed by crooked Nigerian cops—not just a unit within the Nigerian police force, which had constituted itself as a death squad of extortionists terrorizing Nigerians—the Nigerian president, Muhammadu Buhari, finally disbanded the SARS unit.

However, on October 20, 2020, after what seemed like an orchestrated ambush of a mass of peaceful protesters at the Lekki toll gate in Lagos, Nigerian soldiers shot live ammunition with their arms aimed directly at their young Nigerian targets.

The fallen youth had been waving the green-white-green Nigerian flags, while singing the Nigerian anthem on their knees. They had all been unarmed, when the lights were suddenly cut off to hide their assailants, bent on massacring them.

The Nigerian government with its extensive history of treasonable coups, has long been an organization of criminals running a criminal operation. The Nigerian government has supposedly recovered 10 billion US dollars stolen by former military dictator, General Sani Abacha. Buhari himself once came to power by a coup d’état to become a military dictator, who was an avowed fan of the deadliest criminal to rule Nigeria, Sani Abacha. Although now democratically elected, Buhari is proving to employ the bilious tactics of his late mentor, Abacha: at least in his taciturnity for one.

Buhari is yet to give a public statement on the vile attack by his soldiers against peaceful young Nigerian protesters. It was under Abacha’s reign of terror that my childhood friend, Bola Afilaka, was killed. I have never forgotten Bola. Neither has my best friend Micky, who had told me of the night they encountered the cops at the police checkpoint in Ikeja, Lagos in 1995.

The night Bola Afilaka was killed by SARS

I heard the repeated rap on my steel gate that barricaded our door. Although I was not asleep, it was past midnight, and I wondered who it could be. My mom’s bedroom window was closest to the gate and being a light sleeper, it wakes her up.

I heard my best friend whisper in his British accent. He had schooled in England since he was 7. I open up.

“Micky J! Ki lo n shele!” I greet him in our native Yoruba as buddies do.

No sooner had he stepped in than the typically calm Micky got a load off his chest.

“You better warn your friend Bola to learn to kiss ass when dealing with the cops. I just spent a good half an hour begging and prostrating to irate cops to save his ass. If he wants to get killed by those blood-thirsty cops who have no value for life, he should do it when I am not there man. You just have to swallow your pride in this freaking country when dealing with the cops man. Otherwise you will get yourself killed! And they’re not worth it.”

Little did my best friend know that our mutual childhood friend, Bola, would be murdered by officers of the Nigerian police force just a few hours after he’d given me the instruction to persuade him to learn to kiss ass when dealing with cops in Nigeria. I was not there but another mutual friend who had been with Bola at the scene narrated what happened.

Bola who was driving a brand-new car owned by his mom had a girl who was another childhood friend with him. She was with another female friend, and with some other guys, they had gone to enjoy the Lagos night life – at a pepper soup joint, enjoying a few drinks in serene ambiance as friends chatted away. There was nothing else teenagers could do, since we were all home again because our universities were shut down under the brutal dictator, Sani Abacha who ruled us with terror at the time.

There was nothing unusual about the night. Until Bola noticed a black car following them, after he’d dropped off the girls. Ikeja, which was the capital of Lagos experienced sporadic attacks from armed robbers who terrorized residents indulging in the festive life of Lagos, usually on their way back home. But the robbers did not kill you, they simply robbed you and let you go, because they wanted the festivities to continue, since unencumbering the party people of some cash, jewelry and expensive watches was a steady source of income.

Thus, Bola assumed the black car tailing them was filled with robbers. But the university students had no money on them. Sometimes the robbers beat you black and blue and the occupants of his car did not want that. So, Bola stepped on the gas trying to escape them. Although he was not far from his house, he drove away from it since he would not lead robbers to his home to terrorize his neighborhood or his mother.

Eventually, alarmed that the car kept pursuing and now convinced that they were being tailed by robbers, he turned into the premises of a hospital, thinking he’d docked them. However, this turned out to be a blind alley, as the car still showed up soon after. Cornered and afraid, Bola courageously came out of his vehicle with his hands raised in surrender to show they were ready to do whatever the robbers requested.

What happened instantly shocked Bola’s friends. Under the glare of the bright headlights that inundated their vehicle like a klieg light, the occupants heard a sudden burst of gunshots, as Bola grasped his chest while buckling under rapid gunfire. Another occupant in the car was hit in the leg by a bullet. The shooters dragged Bola into their unmarked car as they ordered his other passengers to get into their vehicle. After driving them for a short distance, they were transferred into a pickup truck as they carried them along for the rest of the patrol that night, while Bola bled profusely from the chest, although still alive.

After their patrol, they threw the injured Bola and his two friends into a cell, where Bola’s hand was cuffed to a balustrade to prevent him from escaping. In the early hours of the morning, alarmed that for the first time her first son had not returned home and was with her car, Bola’s mother went to the nearby police station to file a missing person’s report. As she conveyed her anxiety in Yoruba expressions and praying for her son’s safety in tears, Bola drained of so much blood was unable to cry out for his mother, who had miraculously come to complain about her missing son at the very jail the cops who had shot him, had him shackled to a cell balustrade. Neither was the injured friend gyved in the same cell with him able to cry out in his critical condition. Although incapacitated, Bola was optimistic upon hearing his mother’s voice in the police station he’d been held captive.

But the next time his mother would see him was after she’d been informed that her car had been found and was at the station, many hours later. She found his bloodied corpse dumped in the trunk of her car.

Micky had told me of their initial encounter with the cops. He had been driving his own car behind Bola’s when they stopped at a police checkpoint. While ostensibly the procedure should have simply been for the cops to verify that your car documents are in order, the real reason the cops stopped you at the checkpoint was to collect egunje, a bribe. But the teenage Bola, an economics major at the university, who dreamed of helping to modernize Nigeria’s economy, would not have any of it. He provided all the documents he was asked for. His vehicle registration papers were in perfect order, given that his father owned one of the largest and most renowned car dealerships in Nigeria.

Frustrated that Bola was not simply going to give them the egunje they were stationed out at night for, one of the cops starts to abuse Bola.

“Wetin dey do you wey you dey make yanga?” He yells in pidgin challenging Bola’s seeming aloofness and refusal to bribe the cops.

As Micky humorously mimicked the frustrated comments of the corrupt cop a few hours before our friend was killed, little did we know that the threats were to be taken seriously.

About 48 hours after Micky had first informed me of their terrifying encounter with the crooked cops, my best friend was banging on my door again at past midnight. This time my mom is upset and comes out to open the door herself, intending to reprimand him for coming again so late at night.

“Micky what are you two up to? This is the second time you have interrupted my sleep so late in the night.”

“E kaale ma,” Micky whom my mother considers my most responsible friend, prostrates in customary Yoruba fashion when greeting adults. But instead of diffidently explaining, Micky who is also my calmest friend, walks past my mother into the living room and sinks into a chair. My mother figures something is wrong and follows him into the living room too. Everyone is quiet for a moment, because Micky is uncharacteristically stone-faced and reticent despite my mother’s expostulations.

Then he finally opens his mouth. “Bola is dead.”

I heard my mother exclaim suddenly and I could see her fair skin even change color, although she is a black woman, as her chewing stick drops out of her mouth, which was left wide-open in unequivocal shock.

I did not know of anybody whoever wished my constantly grinning skinny friend, Bola, any harm. He was one of those guys that everyone just liked. But before Micky even gave me the details after the terrible news of his death, my mind immediately went to the jealous crooked cop, who promised: “I will deal with you.”