Home > Entertainment > Into the chamber of reflection: How rap became therapeutic in the 2010s 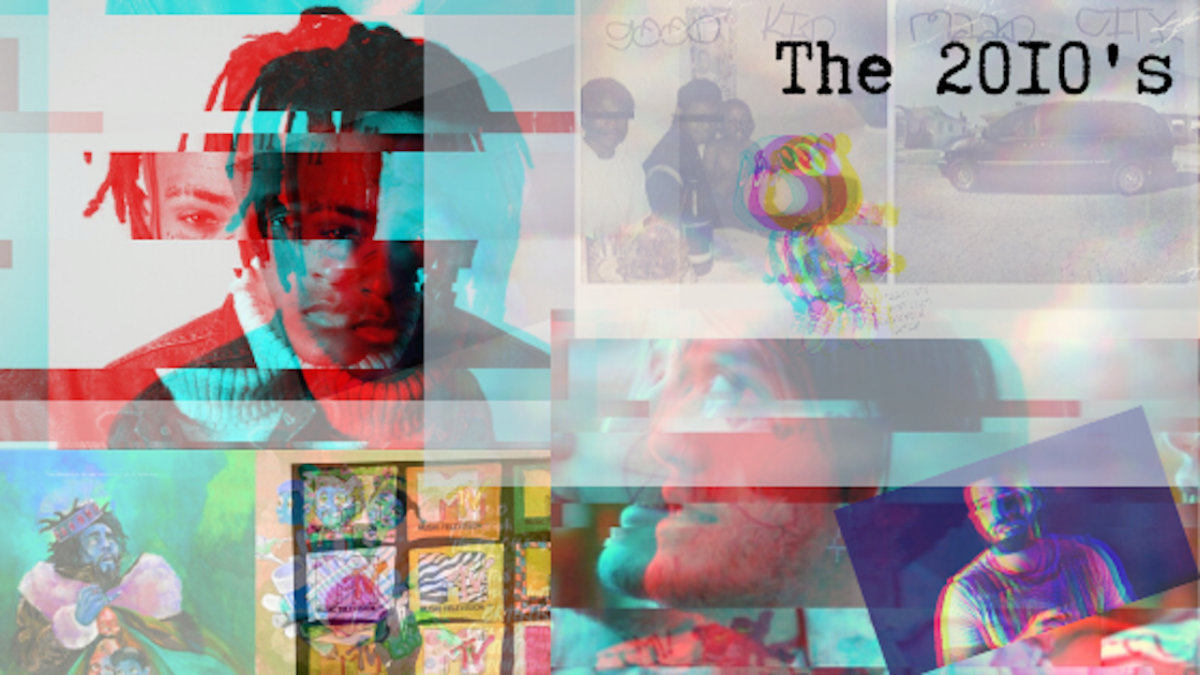 In 2017, Big Sean took listeners on a journey to an alternative universe, in which he never became a famous rapper, but rather an unfulfilled man who never left Detroit.

In 2016, J. Cole rapped to us about the time a SWAT team kicked down his door in a North Carolina suburb at the behest of his neighbors.

As the decade comes to a close, one of the most exciting and insightful things we can do is look back and take a full accounting of the stories we lived and the trends we witnessed.

I experienced some of my most formative years during the last decade, and along with it, all of the transformations that came along with the music that our culture values so much. The music I know and love comes from this era, and it will be with me forever. Though some of these moments might have seemed insignificant, they altered the course of rap forever, informing how artists and fans alike will approach it for years to come.

Between 2010 and 2019, the most seismic shift we witnessed in the genre of hip-hop is that rap became self-aware.

Listening back to some of the hits of the era is an exercise in witnessing the evolution of a form. Between 2000 and 2010 as rap began to dominate the main stream, the music that poured out of stereos across the nation was different.The production was different; the style and length of songs were different; what rappers wore on the covers of their albums was different. Most importantly, the ethos was different. Not to say that all remnants of that era have completely disappeared, but the 2010s witnessed the slow dissolve of Gangsta Rap, and a steady march towards songs which more deliberately sought to deliver a message and tell a story, rather than convey an image of superficial success; streets lined with nice cars and mansions; both filled with beautiful and scantily clad women.

The MTV music video era rewarded tracks that could keep fans entertained. Television sets saturated most Americans’ homes, so the music had to have cinematic qualities as well. However, technological shifts in the 2010s also influenced music. Streaming and blogging reigned supreme. Anyone could make an album, but the music that really resonated with listeners had to have another factor — it had to be intelligent and connect on a deeper level.

Kendrick Lamar’s debut album, Section 80, placed him as one of the premier rappers setting the trend for the following years, as he effortlessly expounded on the realities of life in Compton, a city scarred by gang violence and a chronic drug epidemic. “You know that we crack babies because we born in the 80s,” he preached on his track, ADHD. His second album, Good Kid M.A.A.D City, began with a prayer, “Lord God, I come to you a sinner and I humbly repent for my sins.” The project was a poignant reflection of the reality of many inner-city communities in America, through the lens of Compton, where Kendrick Lamar was born and raised. The unhealthy conditions and attitudes of the culture he sang of rendered not only his, but all communities, mad. To Lamar, every member of black culture was complicit, and everyone needed to take notice.

The focus on reflective storytelling in rap has given way to valuable insights and understandings of the conditions of our communities, as well as the lives and personalities of some of its biggest stars.

Big Sean became a hit-maker over the decade, constantly providing us with stereo-gum as his career took off. Songs like I Don’t Fuck With You became anthems. However, Sean set himself apart with his album I Decided. The album was Sean’s version of the Ghost of Christmas Past, presenting listeners with a version of reality which is so meek, that the aged and unsuccessful Sean jumps into traffic, killing himself. The rest of the album is his re-dedication to pursuing the beauty in life and having a positive impact on his community and those around him. The project ends on a high note, as Sean declares that this is “bigger than me”.

Undeniably, one of the rap master- pieces of the last decade is J. Cole’s Neighbors. The song, inspired by true events, recounts the day that a SWAT team stormed into his North Carolina home, suspecting that he was operating a covert drug operation. In an interview with Complex, Cole’s producer explained that it was a neighbor of his who had called the police, alarmed by the numerous African Americans who had descended upon the wealthy, white suburb. In a subdued and seemingly labored delivery, Cole regretfully informs listeners over a sample of a Kendrick Lamar song that “[…] the neighbors think I’m selling dope,” echoing the plight of black men and women throughout history who left or were forced out of neighborhoods because they weren’t “white enough.” This song, and many like it, set him apart as a rapper with a rare capacity for contemplation.

Cole’s 2018 album, K.O.D was an equally introspective tome. It spoke about the perils of drugs and other vices that people turn to in times of trouble. It was also an exercise in introspection, as Cole revealed to fans that he had at times, stumbled when faced with temptation. Fans speculated on the meaning of the acronym “KOD”. Some thought it meant Kids on Drugs, or maybe even King Overdoses. Whatever it was, it addressed issues that we don’t nearly discuss enough.

Trying to pinpoint an exact moment that marked the departure from the rap that we knew in the noughties is incredibly difficult, but if I had to hazard a guess, I would say that it was September 11, 2007. This day witnessed 50 Cent, the establishment of that era of rap, challenged by Kanye West, who had slowly but surely been ushering in a new age of music. Recall in 2004 when he rapped “I woke up early this morning with a new state of mind / A creative way to rhyme without using knives and guns / Keep your nose out the sky, keep your heart to God / And keep your face to the risin’ sun.”

It has been widely written about and researched, and it seems that the conclusion is clear — we have Kanye to thank for rap as we know it today. But he is also a great case study of rap as an expanding form. In a sense, he is finally dining at the table that he set in 2007.

In 2016, Kanye West had a manic episode that the world witnessed. Describing it to David Letterman in an interview, one can only fathom how scared the world’s most famous performer was. “They have this moment where they put you, they handcuff you, they drug you, they put you on the bed, and they separate you from everyone you know…” He recalled.

In the aughts of the 21st century when society witnessed erratic behavior from celebrities, it became a spectacle. Recall the oh-so-friendly moniker “Wacko Jacko”, or the evening Britney Spears shaved her head clean, and paparazzi couldn’t get enough pictures.

That West had rapped so vulnerably and candidly about less often discussed topics during his career made the fallout more manageable. He was used to dealing with controversy; he courted it. He referenced the manic episode on his next album “Ye.” He later reflected honestly and openly on the episode in a song with Kid Cudi called “Reborn.”

Moments like these have a ripple effect across the continuum of the form.

Many more musicians have been forthcoming about their struggles with mental health. Noisey created an incredible series called The Therapist, which has brought on some of the biggest names in hip-hop such as Joe Budden, Young M.A, and Chief Keef, to discuss instances of trauma in their lives, and how they have (or haven’t) processed it. If rap is a game of Simon Says, then the players were paying attention over the last decade. Today, the real value of an artist comes from how much they reveal about themselves, in an attempt to teach us about ourselves.

Rappers no longer feel the need to hide behind masks that portray them as fearless street crusaders who seek to achieve an end by any means necessary. The tradition, established by forefathers like 50 Cent, Ja Rule, and DMX was being rewritten. Rappers began to show their true selves in an effort to depict the realities which they inhabited. Flaws and all. Rap entered a chamber of reflection.

On the album 4:44, Jay-Z deconstructed his ego, and detangled a nearly decade and a half long string that preached the importance of being hard. “Fuck JAY-Z, I mean, you shot your own brother / How can we know if we can trust JAY-Z?” He reflected.

On Drake’s 2011 album “Take Care”. The simmering of confessional rap that we saw earlier from performers like Usher, came to a full boil in the 2010s. Songs like Look What You’ve Done were examples of the confused revelations that would come to saturate the era. Songs like Hate Sleeping Alone would have been seen as scandalous and unimaginable only a few years earlier. This album became the blueprint from which Bryson Tiller would build T R A P S O U L.

Emotion in rap trickled down from the most recognizable and famous performers, to the lesser known and upcoming. In 2016, Lil Uzi Vert pronounced that “all my friends are dead”. In 2017, XXXTentacion proclaimed “I’m in pain / wanna put ten shots through my brain”. Both artists gave way to their own micro-trends. Rappers like Lil Peep and JuiceWRLD took this type of candid writing to an extreme, with lyrics that seemingly predicted their deaths.

Candid observations like this were not completely absent during the 2000s. But albums were not dedication to telling hard truths. Some of these artists have even created moments that have become key moments in the culture. Childish Gambino’s This is America satirized the harsh reality of gun violence in the country. In this instance of art imitating life, we were able to more firmly grasp the backwardness of our ways.

These developments in rap are welcome, exciting, and beneficial. In the early 2000s, the rawness of rap lent the genre to unfair generalizations; all rappers are violent; rap is a product of hood life, etc. However, the reflective bent of music has allowed it to be seen as an esteemed form of art. In 2018, Kendrick Lamar won a Pulitzer Prize, one of the first awarded to a black musician, for his album DAMN. However, this wasn’t just a win for Black people and African Americans — it was a win for the genre of rap, which was now worthy of being noted as a distinguished form.