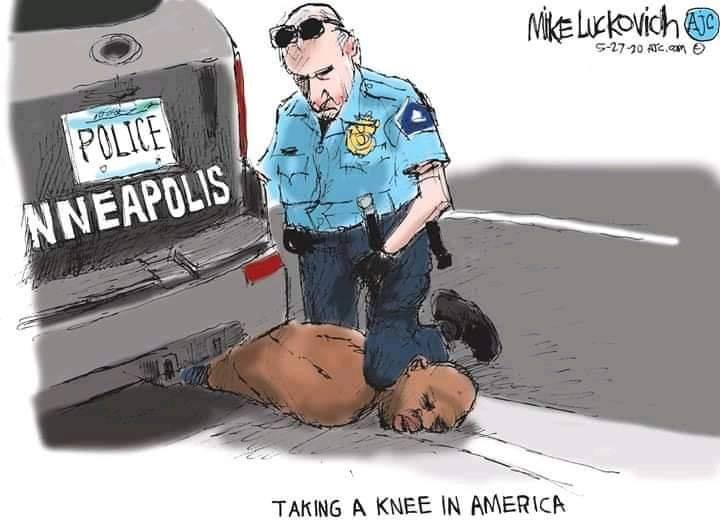 Mr. George Floyd. You see, your life mattered. Inconsequential racists thought your life was not worth anything and so snuffed it out casually with hands in their pockets like they would posture at noon in any mundane activity—in broad daylight.

But no human being has the authority to debase and take the life of another human being. We are all subject to one God, one universe, same rules. My religion is personal and for me. But since my religious Nigerians read what I write, and the “white Christians” claim Jesus too, then let me use an analogy Christians can relate with, albeit at the risk of being accused of blasphemy.

Remember how an innocent Nazarene who dreamed of big things and talked to the people in parables, was accused unjustly; and when the Roman governor of Judaea, Pontius Pilate, gave the people an opportunity to free one accused person, they chose a criminal and murderer, Barabbas instead of Jesus.

Jesus, an innocent man was condemned to die. The torture of a Messiah had been presaged in the Old Testament:

I did religious history, and to historians, Jesus’ actual life was not significant as there were many teachers in Israel who had a modest following during the Roman occupation. However, in the death of a seemingly ordinary man—of course he was thought to be ordinary by the people of his era including the pharisees, and the Romans who brutally tortured, dehumanized, and mocked him before crucifying him, a humiliating way to be killed in protracted agony and meant to cause fear and intimidate the populace—the world came to empathize with his torture and abuse. The victim who had lived an ordinary life was elevated in status and in significance far unfathomable in his nondescript life.

Theologians find basis for the elevation of Christ in scripture, in the allusions to raising a Messiah to the status of deity in death.

“The LORD said to my Lord: “Sit at My right hand until I make Your enemies a footstool for Your feet.” The LORD extends Your mighty scepter from Zion: “Rule in the midst of Your enemies.'” (Psalm 110:1,2)

George Floyd was not Jesus. And I am not comparing him to our Lord and Savior.

However, the Lord God is Sovereign, and He does as He pleases, constantly having compassion on the poor and the persecuted and chooses whom He will elevate in life and death and to the extent of His inscrutable will.

And the Lord said to Moses in Exodus 7:1:

“See, I have made you like God to Pharaoh”.

Mr. George Floyd’s name reverberates all over the world. Men and women have knelt when his name was called. His killers have received the odium they deserve and are loathed even by their own people.

Above all, Mr. George Floyd, who did not utter a curse, or an accusation or harsh word against his torturers and killers, but even as he took his last breaths showed his killer decency and courtesy and called him, “Sir,” has received from the world the respect he deserved, but was denied by his callous executioners.

George Floyd showed regard for the man that dehumanized him, because he was a decent man. And the universe was attentive and the Sovereign of this universe honored his decency and elevated him in a way that will confound others. Did the Lord not elevate a man born in a manger–in the stables where animals lived?

George Floyd united the world and has done more to fight racism than many learned advocates have done in a lifetime. Perhaps, it was the work of God. Everyone, even a seemingly reactionary Attorney General like Barr, has decried the gruesome killing. He described how he was moved by his harrowing death and has called out systemic racism and announced that steps will be taken to end it.

All those who collaborated to kill George Floyd have been arrested. The FBI is investigating the violation of his civil rights.

“When a man’s ways please the Lord, He makes even His enemies be at peace with him.” (Proverbs 16:7)

Binary likely: The ‘unchanging’ normative for Caster Semenya and others