Home > Art > An enterprising artist’s journey from Lagos to London 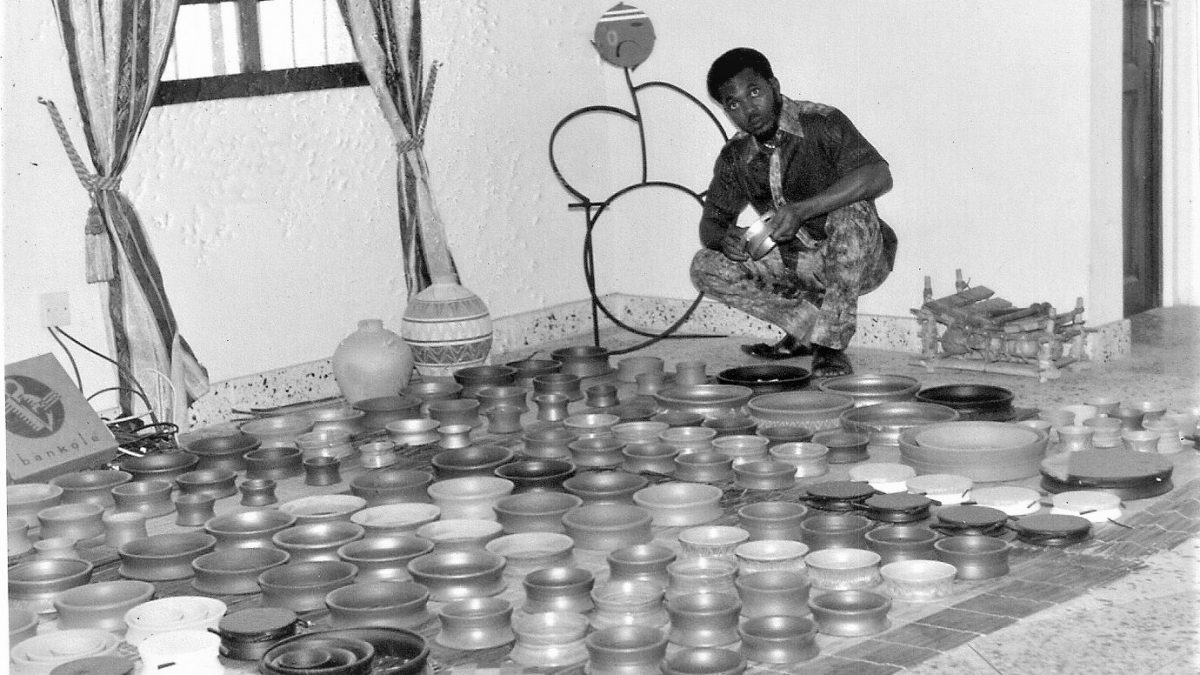 It’s a sunny day. Two golden beams splash through the sliding windows like rays reflecting from a klieg light, causing me to squint my eyes.

“O ti sun,” Kole mistakenly thinks I have slept off.

“Picasso did not start cubism. It had been in Africa long before he came to Africa and copied it without giving the Africans he imitated credit for it,” Kole’s Afrocentrism is unmistakable in his counterpoint to Western misrepresentation and trivializing of African art.

Yoruba. That wakes me up. Not that what Kole is telling me is uninteresting. The only thing is that I have two degrees in history, and I have heard many versions of this recitation before. But now I chip in, because I have been trying to convince Kole on why we Yorubas must part ways from the rest of Nigeria and establish our own nation, building on our rich cultural heritage.

It occurs to me that if that happens, Kole would be forced to choose, since only his mother is Yoruba. Yet he is more fluent in Yoruba than I am. Interestingly, Kole celebrates his Yoruba heritage just as much as he valorizes his Nupe ancestry.

I can still recall him proudly narrating his father’s lineage featuring the first West African Christian martyr—a patriarch of the Bako clan. His great-grandfather’s sacrifice lay the foundation for his descendants as clergymen. Thus, Kole’s father was a Reverend. His uncle is a Bishop. These religious themes seem to resonate in his new vocation as an artist. However, Kole had chided me when I had remarked that he had discovered his love of art much later in life, after a successful perhaps, precocious career as a young entrepreneur who started what came to be arguably the leading events management outfit in Lagos—again Kole chides, “In Nigeria!”

Twenty-three years ago, Kole was frantically directing his army of young men in black pants, shining patent leather shoes, and red jackets with embroidered cuffs. Image was a key element to Kole’s protea, and it had to be draped in the right attire. Your packaging as it was often labeled in the image conscious Lagos metropolis was crucial, and it played no small part in landing Kole’s Le Serveur (The Servers in French) the gig to cater and serve at one of the parties marking the inauguration of the newly elected governor of Lagos state.

It was a momentous occasion marking the end of 16 years of repressive military dictatorship in Africa’s most populous country. Eight years before, Kole’s team of diligent gendarme looking waiters had served at the send-off ceremony of then military dictator General Ibrahim Babangida’s relocation to Abuja, ending the century old reign of Lagos—with a population of 20 million—as the capital of Nigeria since its seat as a conquered colony in the British empire.

Given the five feet, seven inches tall former bodybuilding entrepreneur had garnered an impressive roster of Nigeria’s paying elite as clients, including the late Chief M.K.O Abiola once said to be the richest man in Africa, one would question why Kole, then in his 30s, left it all for a paintbrush. After all many of Nigeria’s creatives have been known to parlay connections to their powerful clientele into political jobs (which bring lucrative business contracts), if not oil blocks. It is said that the richest woman in Nigeria, Folorunsho Alakija, had leveraged her work as a seamstress to a former military dictator’s wife to acquire oil blocks and amass a wealth of over a billion dollars in net worth.

But Kole who was known all over the University of Lagos campus for his beatnik Afrocentric dressing stayed true to his identity as an artist. Riding a mud-colored Triumph 750cc, with his Wayfarer glasses reflecting the sunlight as he cruised through unilag campus, Kole represented the contemporary Lagosian. It was the way he fused western functionality with African themed styles with ease that marked Kole as an artist. Where others tried to be completely western in their dress sense or go completely native, it was not problematic for Kole to blend both worlds.

Thus, Kole was able to cut through Lagos go-slow riding his motorbike and get to class on time, while speeding through to his office off Adeniran Ogunsanya, a commercial area about 6 miles from his school, and then make it back home to help his mother run her catering business.

In the 90s, Kole’s style was a foreshadowing of what we now see in the trendsetting style of global Nigerian contemporary artists like Burna Boy.

Where Kole stood out 20 years ago for donning his handcrafted leather Kano sandals, and his Yoruba patterned buba or dashiki on off color shokoto in lecture halls, today afro-urban fusion is trending on Nigerian university campuses—especially in the south.

“Art was always my first love,” reiterates Kole. “It was while doing my A-Levels at Federal School of Arts and Sciences in Suleja that I first realized that I wanted to be an artist some day and use art to tell the history of Africa.”

Kole explains how subjects such as fine art, history, and geography showed him a Nigeria he had not known before.

“So how did you get into business instead?” I probed, puzzled by the revelation of Kole’s true passion for art preceding his interest in business.

“You know iya’s catering business was growing rapidly, and I realized she needed help. Instead of her handling just the catering of the food and the client being affected negatively by a waiting service that fails to deliver, I decided to fill in the gap and help. The lack of servers could limit the enjoyment of the best prepared food.

“It was a service I saw that I could provide, given my popularity on campus and in the area. I realized I could also help provide jobs for young men and give them a sense of pride in accomplishing something. That was how Le Serveur began. And the lads had so much respect for me, and so they could identify with my vision.”

However, Kole still found a way to combine his entrepreneurial bent with his arty side by promoting bodybuilding and fashion shows which headlined popular musicians like Femi Kuti, the first son of legendary Afrobeat pioneer, Fela. I recall the first time I went to Fela’s Shrine where the founder of Afrobeat music performed, to watch Femi Kuti play. Kole had taken me to see and experience the ambiance of the celebrated mecca of African music.

I also remember Kole was really into bodybuilding. I learned that he had started another outfit he called Body Craft Consult, which supplied sporting equipment in addition to providing security detail and bouncers for parties, celebrity events, and clubs.

Kole was always busy back then and seemed to need the kinetic energy to keep going and never stop. I could not imagine him settling for the serenity required to work on a gaze using a solitary brush. But I suppose it is the same level of detail he gave his transitory business ventures that translates to the steadiness required to perfect a bit of detail on a canvas that will outlive the artist.

Kole would disengage himself from the business he had built from scratch when he was just 21 years old. He actively took up his paint brush around 1999, converting his apartment in Magodo on the outskirts of Lagos, in an estate popularly known as white house, to a studio. Kole worked frantically both indoors and outdoors mainly to find the space to maneuver his larger pieces, or to use the natural sunlight to aid the wet leather and smell of his signature drums.

However, for his precision paintings Kole needs the enclosure and works indoors to avoid distraction. Does he regret that he did not start painting and working as an artist earlier? Kole indicates that his expression as an artist has always been there, and his art is a culmination of all his experiences with none of it being wasted time or insignificant. Again, Kole points out how the one year he spent doing his A-Levels had a huge impact on him in learning about the medium he now works in as an artist.

Using his knowledge of history, Kole came to pioneer the conversion of the Yoruba talking drums from a musical instrument to a functional art and visual aesthetic expression. His style is a dramatic yet authentic fusion of cubism, surrealism, and inversion. For his medium, Kole uses paint, burgundy tint solutions, beads, cowries, polymers, metallic surfaces (copper), hides, canvas, acrylic. He uses various types of wood, preferring mahogany, hardwood for the pegs of drums used to control the tones that resonate from the drums. His most appreciated pieces have sold for about 10,000 dollars.

Kole travels far to obtain the best materials for his art: to Ibadan, Kano, and Jos for hides; and to Kaduna the site of the 3,500 year-old Nok terracotta statuettes, said to be the oldest complex art discovered in sub-Saharan Africa for his clay, which he converts to quality ceramics after an ancient method of glazing and firing is utilized. Kole tries to maintain fidelity to the ancient techniques of Nigerian art which he considers unparalleled in the world, as he argues, “The complexity of ancient African art has been misrepresented by the West.”

In 2016, Kole relocated to the United Kingdom with his wife and 2 children. He works assiduously day and night, sleeping for just about 2 hours a day. When he gets inspiration, he likes to work on it immediately. Leveraging on western technology, Kole displays his art through his gallery on bankoleart.com. It is clear that he feels he is on a mission to re-imagining African art in the global lens and repositioning it as a centerpiece of world heritage.